Is Brookfield Property Partners LP (NASDAQ:BPY) worth your attention right now? Money managers are becoming less confident. The number of bullish hedge fund positions were cut by 2 in recent months. Our calculations also showed that BPY isn’t among the 30 most popular stocks among hedge funds (see the video below).

In today’s marketplace there are tons of gauges shareholders put to use to assess their holdings. A duo of the most useful gauges are hedge fund and insider trading activity. Our researchers have shown that, historically, those who follow the best picks of the top fund managers can beat the broader indices by a significant margin (see the details here). 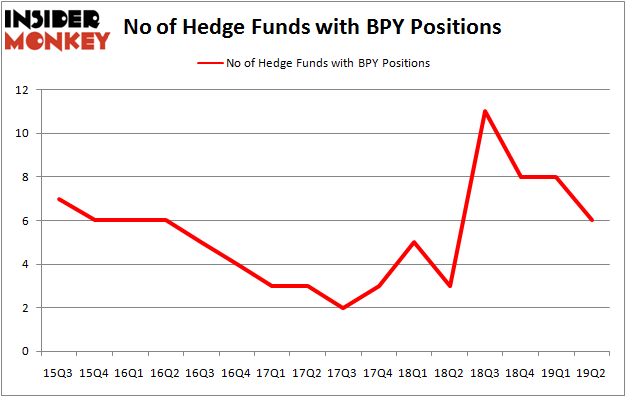 Unlike this former hedge fund manager who is convinced Dow will soar past 40000, our long-short investment strategy doesn’t rely on bull markets to deliver double digit returns. We only rely on hedge fund buy/sell signals. We’re going to take a look at the new hedge fund action encompassing Brookfield Property Partners LP (NASDAQ:BPY).

The largest stake in Brookfield Property Partners LP (NASDAQ:BPY) was held by Renaissance Technologies, which reported holding $25.1 million worth of stock at the end of March. It was followed by Vertex One Asset Management with a $9.8 million position. Other investors bullish on the company included Forward Management, Citadel Investment Group, and Citadel Investment Group.

Due to the fact that Brookfield Property Partners LP (NASDAQ:BPY) has faced declining sentiment from hedge fund managers, logic holds that there exists a select few hedgies that elected to cut their full holdings by the end of the second quarter. Interestingly, Paul Marshall and Ian Wace’s Marshall Wace LLP dropped the biggest stake of the “upper crust” of funds tracked by Insider Monkey, worth an estimated $13 million in stock, and Peter Rathjens, Bruce Clarke and John Campbell’s Arrowstreet Capital was right behind this move, as the fund said goodbye to about $10 million worth. These bearish behaviors are intriguing to say the least, as total hedge fund interest dropped by 2 funds by the end of the second quarter.

As you can see these stocks had an average of 17.75 hedge funds with bullish positions and the average amount invested in these stocks was $502 million. That figure was $54 million in BPY’s case. Xerox Holdings Corporation (NYSE:XRX) is the most popular stock in this table. On the other hand The Carlyle Group LP (NASDAQ:CG) is the least popular one with only 7 bullish hedge fund positions. Compared to these stocks Brookfield Property Partners LP (NASDAQ:BPY) is even less popular than CG. Hedge funds clearly dropped the ball on BPY as the stock delivered strong returns, though hedge funds’ consensus picks still generated respectable returns. Our calculations showed that top 20 most popular stocks among hedge funds returned 24.4% in 2019 through September 30th and outperformed the S&P 500 ETF (SPY) by 4 percentage points. A small number of hedge funds were also right about betting on BPY as the stock returned 9.1% during the third quarter and outperformed the market by an even larger margin.