Is Broadcom Inc (AVGO) A Good Stock To Buy?

Is Broadcom Inc (NASDAQ:AVGO) undervalued? Hedge funds are turning bullish. The number of long hedge fund bets went up by 1 lately. Our calculations also showed that AVGO isn’t among the 30 most popular stocks among hedge funds (click for Q3 rankings and see the video below for Q2 rankings).

In the eyes of most traders, hedge funds are assumed to be worthless, outdated investment tools of yesteryear. While there are more than 8000 funds in operation today, We hone in on the upper echelon of this club, about 750 funds. These investment experts shepherd the majority of all hedge funds’ total capital, and by shadowing their first-class stock picks, Insider Monkey has figured out numerous investment strategies that have historically outrun Mr. Market. Insider Monkey’s flagship short hedge fund strategy beat the S&P 500 short ETFs by around 20 percentage points a year since its inception in May 2014. Our portfolio of short stocks lost 27.8% since February 2017 (through November 21st) even though the market was up more than 39% during the same period. We just shared a list of 7 short targets in our latest quarterly update .

Unlike the largest US hedge funds that are convinced Dow will soar past 40,000 or the world’s most bearish hedge fund that’s more convinced than ever that a crash is coming, our long-short investment strategy doesn’t rely on bull or bear markets to deliver double digit returns. We only rely on the best performing hedge funds‘ buy/sell signals. Let’s check out the new hedge fund action regarding Broadcom Inc (NASDAQ:AVGO).

At Q3’s end, a total of 54 of the hedge funds tracked by Insider Monkey were bullish on this stock, a change of 2% from the second quarter of 2019. On the other hand, there were a total of 49 hedge funds with a bullish position in AVGO a year ago. With the smart money’s positions undergoing their usual ebb and flow, there exists an “upper tier” of notable hedge fund managers who were adding to their holdings significantly (or already accumulated large positions). 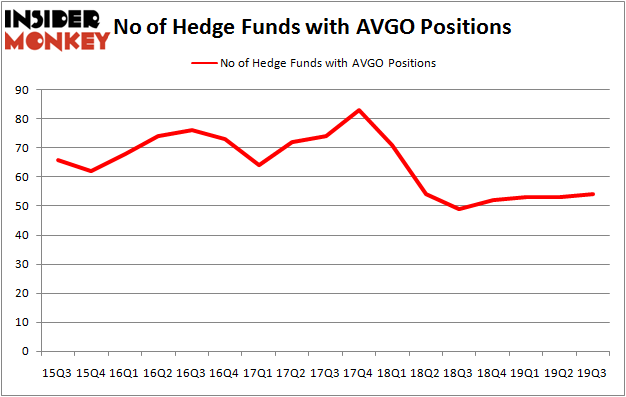 When looking at the institutional investors followed by Insider Monkey, First Pacific Advisors, managed by Robert Rodriguez and Steven Romick, holds the largest position in Broadcom Inc (NASDAQ:AVGO). First Pacific Advisors has a $430.3 million position in the stock, comprising 4.1% of its 13F portfolio. On First Pacific Advisors’s heels is Andrew Wellington and Jeff Keswin of Lyrical Asset Management, with a $397.8 million position; the fund has 6% of its 13F portfolio invested in the stock. Remaining members of the smart money that are bullish contain William von Mueffling’s Cantillon Capital Management, Ken Griffin’s Citadel Investment Group and Philippe Laffont’s Coatue Management. In terms of the portfolio weights assigned to each position Isomer Partners allocated the biggest weight to Broadcom Inc (NASDAQ:AVGO), around 8.63% of its portfolio. 40 North Management is also relatively very bullish on the stock, setting aside 8.09 percent of its 13F equity portfolio to AVGO.

With a general bullishness amongst the heavyweights, specific money managers have jumped into Broadcom Inc (NASDAQ:AVGO) headfirst. Appaloosa Management, managed by David Tepper, initiated the most outsized position in Broadcom Inc (NASDAQ:AVGO). Appaloosa Management had $75.9 million invested in the company at the end of the quarter. Jeffrey Talpins’s Element Capital Management also made a $38.6 million investment in the stock during the quarter. The following funds were also among the new AVGO investors: Peter Rathjens, Bruce Clarke and John Campbell’s Arrowstreet Capital, Karim Abbadi and Edward McBride’s Centiva Capital, and Matthew Tewksbury’s Stevens Capital Management.

Let’s now take a look at hedge fund activity in other stocks similar to Broadcom Inc (NASDAQ:AVGO). We will take a look at BHP Group (NYSE:BBL), Eli Lilly and Company (NYSE:LLY), GlaxoSmithKline plc (NYSE:GSK), and The Toronto-Dominion Bank (NYSE:TD). All of these stocks’ market caps match AVGO’s market cap.

As you can see these stocks had an average of 25.75 hedge funds with bullish positions and the average amount invested in these stocks was $1162 million. That figure was $2515 million in AVGO’s case. Eli Lilly and Company (NYSE:LLY) is the most popular stock in this table. On the other hand The Toronto-Dominion Bank (NYSE:TD) is the least popular one with only 15 bullish hedge fund positions. Compared to these stocks Broadcom Inc (NASDAQ:AVGO) is more popular among hedge funds. Our calculations showed that top 20 most popular stocks among hedge funds returned 37.4% in 2019 through the end of November and outperformed the S&P 500 ETF (SPY) by 9.9 percentage points. Hedge funds were also right about betting on AVGO as the stock returned 14.5% during the first two months of Q4 and outperformed the market by an even larger margin. Hedge funds were clearly right about piling into this stock relative to other stocks with similar market capitalizations.