Is Briggs & Stratton Corporation (BGG) A Good Stock To Buy?

Briggs & Stratton Corporation (NYSE:BGG) was in 10 hedge funds’ portfolios at the end of December. BGG investors should pay attention to a decrease in hedge fund sentiment of late. There were 15 hedge funds in our database with BGG holdings at the end of the previous quarter. Our calculations also showed that bgg isn’t among the 30 most popular stocks among hedge funds.

Heading into the first quarter of 2019, a total of 10 of the hedge funds tracked by Insider Monkey held long positions in this stock, a change of -33% from the previous quarter. Below, you can check out the change in hedge fund sentiment towards BGG over the last 14 quarters. So, let’s review which hedge funds were among the top holders of the stock and which hedge funds were making big moves. 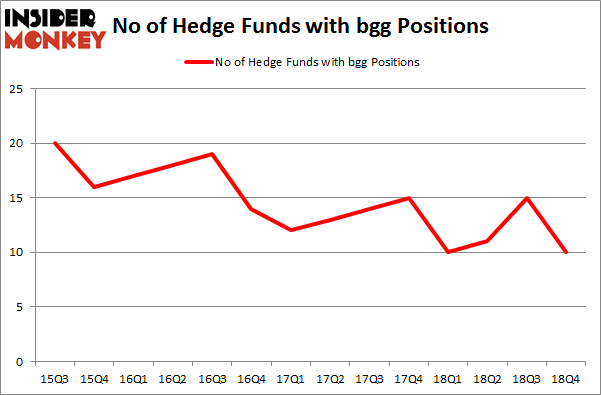 More specifically, D E Shaw was the largest shareholder of Briggs & Stratton Corporation (NYSE:BGG), with a stake worth $2.8 million reported as of the end of December. Trailing D E Shaw was Citadel Investment Group, which amassed a stake valued at $2.7 million. Harvest Capital Strategies, Renaissance Technologies, and Two Sigma Advisors were also very fond of the stock, giving the stock large weights in their portfolios.

Due to the fact that Briggs & Stratton Corporation (NYSE:BGG) has experienced declining sentiment from the smart money, we can see that there was a specific group of hedge funds who were dropping their positions entirely by the end of the third quarter. Intriguingly, Joel Greenblatt’s Gotham Asset Management dropped the biggest investment of all the hedgies followed by Insider Monkey, comprising an estimated $0.9 million in stock. John A. Levin’s fund, Levin Capital Strategies, also sold off its stock, about $0.3 million worth. These moves are important to note, as aggregate hedge fund interest was cut by 5 funds by the end of the third quarter.