Is BRF S.A. (BRFS) A Good Stock To Buy According To Hedgies?

BRF S.A. (NYSE:BRFS) investors should be aware of a decrease in support from the world’s most elite money managers in recent months. Our calculations also showed that brfs isn’t among the 30 most popular stocks among hedge funds.

To most traders, hedge funds are seen as underperforming, outdated financial tools of yesteryear. While there are greater than 8000 funds trading at present, We look at the top tier of this club, about 750 funds. These investment experts direct the lion’s share of the hedge fund industry’s total asset base, and by watching their unrivaled picks, Insider Monkey has figured out a number of investment strategies that have historically outstripped the S&P 500 index. Insider Monkey’s flagship hedge fund strategy surpassed the S&P 500 index by nearly 5 percentage points per year since its inception in May 2014 through early November 2018. We were able to generate large returns even by identifying short candidates. Our portfolio of short stocks lost 27.5% since February 2017 (through March 12th) even though the market was up nearly 25% during the same period. We just shared a list of 6 short targets in our latest quarterly update and they are already down an average of 6% in less than a month.

At Q4’s end, a total of 9 of the hedge funds tracked by Insider Monkey were long this stock, a change of -10% from the second quarter of 2018. Below, you can check out the change in hedge fund sentiment towards BRFS over the last 14 quarters. With the smart money’s positions undergoing their usual ebb and flow, there exists a select group of key hedge fund managers who were adding to their holdings significantly (or already accumulated large positions). 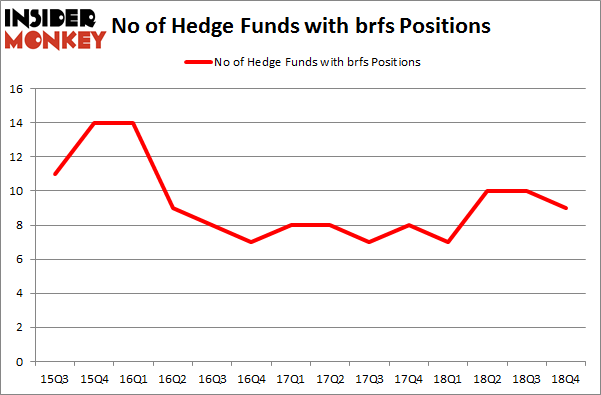 The largest stake in BRF S.A. (NYSE:BRFS) was held by Oaktree Capital Management, which reported holding $30.8 million worth of stock at the end of September. It was followed by QVT Financial with a $8 million position. Other investors bullish on the company included Renaissance Technologies, Adage Capital Management, and Citadel Investment Group.

Seeing as BRF S.A. (NYSE:BRFS) has faced bearish sentiment from the entirety of the hedge funds we track, logic holds that there exists a select few funds that slashed their positions entirely in the third quarter. It’s worth mentioning that Joshua Friedman and Mitchell Julis’s Canyon Capital Advisors dropped the biggest position of all the hedgies watched by Insider Monkey, comprising an estimated $5.2 million in stock. Michael Platt and William Reeves’s fund, BlueCrest Capital Mgmt., also dropped its stock, about $1 million worth. These bearish behaviors are intriguing to say the least, as aggregate hedge fund interest was cut by 1 funds in the third quarter.

As you can see these stocks had an average of 22.5 hedge funds with bullish positions and the average amount invested in these stocks was $432 million. That figure was $49 million in BRFS’s case. Acuity Brands, Inc. (NYSE:AYI) is the most popular stock in this table. On the other hand Woodward Inc (NASDAQ:WWD) is the least popular one with only 14 bullish hedge fund positions. Compared to these stocks BRF S.A. (NYSE:BRFS) is even less popular than WWD. It seems like hedge funds sold the stock at the wrong time. Our calculations showed that top 15 most popular stocks among hedge funds returned 24.2% through April 22nd and outperformed the S&P 500 ETF (SPY) by more than 7 percentage points. Hedge funds were also right about betting on BRFS as the stock returned 25.0% and outperformed the market as well.