Is Boston Omaha Corporation (BOMN) A Good Stock To Buy?

A market correction in the fourth quarter, spurred by a number of global macroeconomic concerns and rising interest rates ended up having a negative impact on the markets and many hedge funds as a result. The stocks of smaller companies were especially hard hit during this time as investors fled to investments seen as being safer. This is evident in the fact that the Russell 2000 ETF underperformed the S&P 500 ETF by nearly 7 percentage points during the fourth quarter. We also received indications that hedge funds were trimming their positions amid the market volatility and uncertainty, and given their greater inclination towards smaller cap stocks than other investors, it follows that a stronger sell-off occurred in those stocks. Let’s study the hedge fund sentiment to see how those concerns affected their ownership of Boston Omaha Corporation (NASDAQ:BOMN) during the quarter.

Boston Omaha Corporation (NASDAQ:BOMN) shares haven’t seen a lot of action during the third quarter. Overall, hedge fund sentiment was unchanged. The stock was in 4 hedge funds’ portfolios at the end of the fourth quarter of 2018. At the end of this article we will also compare BOMN to other stocks including Global Indemnity plc (NASDAQ:GBLI), Ribbon Communications Inc. (NASDAQ:RBBN), and Universal Logistics Holdings, Inc. (NASDAQ:ULH) to get a better sense of its popularity.

How have hedgies been trading Boston Omaha Corporation (NASDAQ:BOMN)? 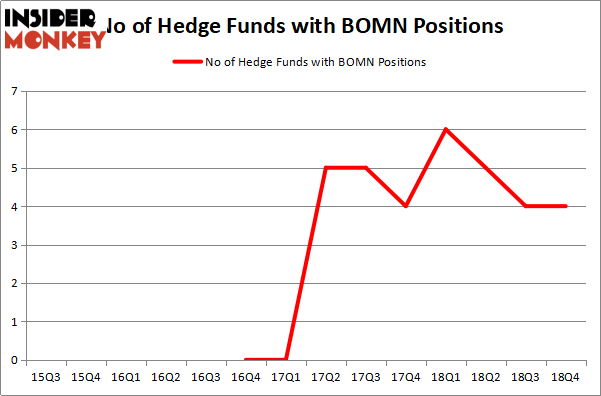 According to publicly available hedge fund and institutional investor holdings data compiled by Insider Monkey, Adam Peterson’s Magnolia Capital Fund has the most valuable position in Boston Omaha Corporation (NASDAQ:BOMN), worth close to $160.4 million, accounting for 25.2% of its total 13F portfolio. On Magnolia Capital Fund’s heels is Charles Akre of Akre Capital Management, with a $5.7 million position; the fund has 0.1% of its 13F portfolio invested in the stock. Other peers that hold long positions include Louis Bacon’s Moore Global Investments and Murray Stahl’s Horizon Asset Management.

As you can see these stocks had an average of 10 hedge funds with bullish positions and the average amount invested in these stocks was $29 million. That figure was $168 million in BOMN’s case. Ribbon Communications Inc. (NASDAQ:RBBN) is the most popular stock in this table. On the other hand Global Indemnity plc (NASDAQ:GBLI) is the least popular one with only 5 bullish hedge fund positions. Compared to these stocks Boston Omaha Corporation (NASDAQ:BOMN) is even less popular than GBLI. Hedge funds dodged a bullet by taking a bearish stance towards BOMN. Our calculations showed that the top 15 most popular hedge fund stocks returned 24.2% through April 22nd and outperformed the S&P 500 ETF (SPY) by more than 7 percentage points. Unfortunately BOMN wasn’t nearly as popular as these 15 stock (hedge fund sentiment was very bearish); BOMN investors were disappointed as the stock returned 6.6% and underperformed the market. If you are interested in investing in large cap stocks with huge upside potential, you should check out the top 15 most popular stocks) among hedge funds as 13 of these stocks already outperformed the market this year.