Is Bonanza Creek Energy Inc (BCEI) A Good Stock To Buy According To Hedgies?

Out of thousands of stocks that are currently traded on the market, it is difficult to identify those that will really generate strong returns. Hedge funds and institutional investors spend millions of dollars on analysts with MBAs and PhDs, who are industry experts and well connected to other industry and media insiders on top of that. Individual investors can piggyback the hedge funds employing these talents and can benefit from their vast resources and knowledge in that way. We analyze quarterly 13F filings of nearly 750 hedge funds and, by looking at the smart money sentiment that surrounds a stock, we can determine whether it has the potential to beat the market over the long-term. Therefore, let’s take a closer look at what smart money thinks about Bonanza Creek Energy Inc (NYSE:BCEI).

Bonanza Creek Energy Inc (NYSE:BCEI) was in 15 hedge funds’ portfolios at the end of the second quarter of 2019. BCEI has seen a decrease in support from the world’s most elite money managers in recent months. There were 16 hedge funds in our database with BCEI holdings at the end of the previous quarter. Our calculations also showed that BCEI isn’t among the 30 most popular stocks among hedge funds (see the video below).

Unlike other investors who track every movement of the 25 largest hedge funds, our long-short investment strategy relies on hedge fund buy/sell signals given by the 100 best performing hedge funds. We’re going to take a look at the key hedge fund action regarding Bonanza Creek Energy Inc (NYSE:BCEI).

At the end of the second quarter, a total of 15 of the hedge funds tracked by Insider Monkey were long this stock, a change of -6% from one quarter earlier. On the other hand, there were a total of 22 hedge funds with a bullish position in BCEI a year ago. With hedgies’ positions undergoing their usual ebb and flow, there exists an “upper tier” of key hedge fund managers who were boosting their stakes meaningfully (or already accumulated large positions). 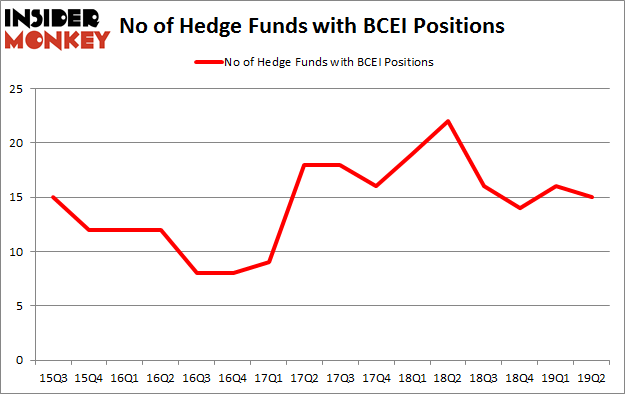 More specifically, Mangrove Partners was the largest shareholder of Bonanza Creek Energy Inc (NYSE:BCEI), with a stake worth $42.2 million reported as of the end of March. Trailing Mangrove Partners was Oaktree Capital Management, which amassed a stake valued at $33.1 million. PAR Capital Management, Brigade Capital, and Millennium Management were also very fond of the stock, giving the stock large weights in their portfolios.

Due to the fact that Bonanza Creek Energy Inc (NYSE:BCEI) has faced a decline in interest from the aggregate hedge fund industry, it’s safe to say that there were a few money managers who sold off their entire stakes by the end of the second quarter. Interestingly, Benjamin A. Smith’s Laurion Capital Management dropped the biggest position of the “upper crust” of funds followed by Insider Monkey, worth close to $0.3 million in stock, and Steve Cohen’s Point72 Asset Management was right behind this move, as the fund dropped about $0.1 million worth. These transactions are interesting, as total hedge fund interest fell by 1 funds by the end of the second quarter.

As you can see these stocks had an average of 8.25 hedge funds with bullish positions and the average amount invested in these stocks was $34 million. That figure was $147 million in BCEI’s case. Shoe Carnival, Inc. (NASDAQ:SCVL) is the most popular stock in this table. On the other hand Insteel Industries Inc (NASDAQ:IIIN) is the least popular one with only 6 bullish hedge fund positions. Compared to these stocks Bonanza Creek Energy Inc (NYSE:BCEI) is more popular among hedge funds. Our calculations showed that top 20 most popular stocks among hedge funds returned 24.4% in 2019 through September 30th and outperformed the S&P 500 ETF (SPY) by 4 percentage points. Hedge funds were also right about betting on BCEI as the stock returned 7.2% during Q3 and outperformed the market by an even larger margin. Hedge funds were clearly right about piling into this stock relative to other stocks with similar market capitalizations.