Is Boingo Wireless Inc (WIFI) A Good Stock To Buy?

Hedge funds and large money managers usually invest with a focus on the long-term horizon and, therefore, short-lived dips on the charts, usually don’t make them change their opinion towards a company. This time it may be different. During the first 6 weeks of the fourth quarter we observed increased volatility and small-cap stocks underperformed the market. Hedge fund investor letters indicated that they are cutting their overall exposure, closing out some position and doubling down on others. Let’s take a look at the hedge fund sentiment towards Boingo Wireless Inc (NASDAQ:WIFI) to find out whether it was one of their high conviction long-term ideas.

Boingo Wireless Inc (NASDAQ:WIFI) investors should be aware of an increase in activity from the world’s largest hedge funds of late. WIFI was in 17 hedge funds’ portfolios at the end of September. There were 13 hedge funds in our database with WIFI holdings at the end of the previous quarter. Our calculations also showed that WIFI isn’t among the 30 most popular stocks among hedge funds.

In the financial world there are numerous signals stock market investors use to grade their holdings. Two of the less known signals are hedge fund and insider trading moves. We have shown that, historically, those who follow the top picks of the elite investment managers can outperform their index-focused peers by a very impressive amount (see the details here).

At the end of the third quarter, a total of 17 of the hedge funds tracked by Insider Monkey held long positions in this stock, a change of 31% from one quarter earlier. On the other hand, there were a total of 13 hedge funds with a bullish position in WIFI at the beginning of this year. With the smart money’s sentiment swirling, there exists a select group of noteworthy hedge fund managers who were increasing their holdings substantially (or already accumulated large positions). 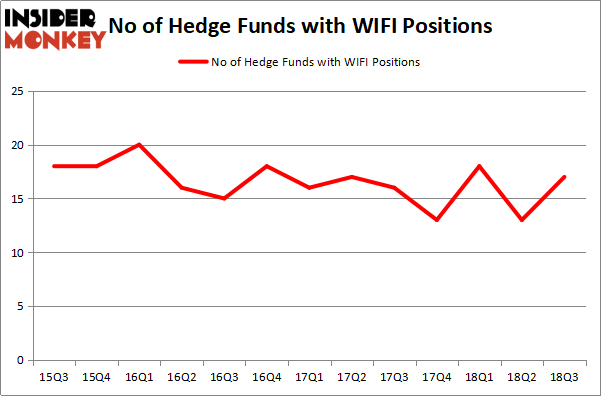 More specifically, Renaissance Technologies was the largest shareholder of Boingo Wireless Inc (NASDAQ:WIFI), with a stake worth $104.6 million reported as of the end of September. Trailing Renaissance Technologies was Daruma Asset Management, which amassed a stake valued at $34.2 million. Portolan Capital Management, Two Sigma Advisors, and Osterweis Capital Management were also very fond of the stock, giving the stock large weights in their portfolios.

As aggregate interest increased, key money managers were breaking ground themselves. HBK Investments, managed by David Costen Haley, established the biggest position in Boingo Wireless Inc (NASDAQ:WIFI). HBK Investments had $1 million invested in the company at the end of the quarter. Paul Tudor Jones’s Tudor Investment Corp also made a $0.3 million investment in the stock during the quarter. The other funds with new positions in the stock are Matthew Hulsizer’s PEAK6 Capital Management and Dmitry Balyasny’s Balyasny Asset Management.

As you can see these stocks had an average of 12.5 hedge funds with bullish positions and the average amount invested in these stocks was $96 million. That figure was $201 million in WIFI’s case. La-Z-Boy Incorporated (NYSE:LZB) is the most popular stock in this table. On the other hand Eaton Vance Ltd Duration Income Fund (NYSEMKT:EVV) is the least popular one with only 5 bullish hedge fund positions. Boingo Wireless Inc (NASDAQ:WIFI) is not the most popular stock in this group but hedge fund interest is still above average. This is a slightly positive signal but we’d rather spend our time researching stocks that hedge funds are piling on. In this regard LZB might be a better candidate to consider a long position.