Concerns over rising interest rates and expected further rate increases have hit several stocks hard since the end of the third quarter. NASDAQ and Russell 2000 indices are already in correction territory. More importantly, Russell 2000 ETF (IWM) underperformed the larger S&P 500 ETF (SPY) by about 4 percentage points in the first half of the fourth quarter. Hedge funds and institutional investors tracked by Insider Monkey usually invest a disproportionate amount of their portfolios in smaller cap stocks. We have been receiving indications that hedge funds were paring back their overall exposure and this is one of the factors behind the recent movements in major indices. In this article, we will take a closer look at hedge fund sentiment towards bluebird bio Inc (NASDAQ:BLUE).

bluebird bio Inc (NASDAQ:BLUE) shares haven’t seen a lot of action during the third quarter. Overall, hedge fund sentiment was unchanged. The stock was in 34 hedge funds’ portfolios at the end of September. The level and the change in hedge fund popularity aren’t the only variables you need to analyze to decipher hedge funds’ perspectives. A stock may witness a boost in popularity but it may still be less popular than similarly priced stocks. That’s why at the end of this article we will examine companies such as HD Supply Holdings Inc (NASDAQ:HDS), ON Semiconductor Corporation (NASDAQ:ON), and MGM Growth Properties LLC (NYSE:MGP) to gather more data points.

What have hedge funds been doing with bluebird bio Inc (NASDAQ:BLUE)?

At the end of the third quarter, a total of 34 of the hedge funds tracked by Insider Monkey were long this stock, no change from the previous quarter. Below, you can check out the change in hedge fund sentiment towards BLUE over the last 13 quarters. With hedge funds’ positions undergoing their usual ebb and flow, there exists an “upper tier” of key hedge fund managers who were adding to their stakes significantly (or already accumulated large positions). 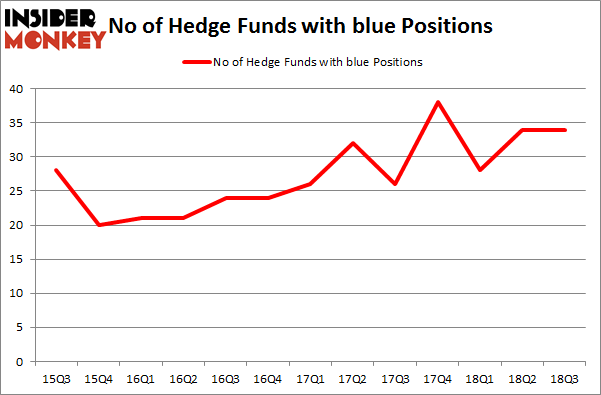 The largest stake in bluebird bio Inc (NASDAQ:BLUE) was held by OrbiMed Advisors, which reported holding $67 million worth of stock at the end of September. It was followed by Casdin Capital with a $37.7 million position. Other investors bullish on the company included Redmile Group, Balyasny Asset Management, and Masters Capital Management.

Since bluebird bio Inc (NASDAQ:BLUE) has faced declining sentiment from hedge fund managers, we can see that there were a few funds who sold off their entire stakes heading into Q3. At the top of the heap, Dmitry Balyasny’s Balyasny Asset Management said goodbye to the biggest investment of the 700 funds monitored by Insider Monkey, comprising close to $21.2 million in stock. Phill Gross and Robert Atchinson’s fund, Adage Capital Management, also said goodbye to its stock, about $15.3 million worth. These bearish behaviors are interesting, as aggregate hedge fund interest stayed the same (this is a bearish signal in our experience).

As you can see these stocks had an average of 27.5 hedge funds with bullish positions and the average amount invested in these stocks was $601 million. That figure was $321 million in BLUE’s case. HD Supply Holdings Inc (NASDAQ:HDS) is the most popular stock in this table. On the other hand MGM Growth Properties LLC (NYSE:MGP) is the least popular one with only 15 bullish hedge fund positions. bluebird bio Inc (NASDAQ:BLUE) is not the most popular stock in this group but hedge fund interest is still above average. This is a slightly positive signal but we’d rather spend our time researching stocks that hedge funds are piling on. In this regard HDS might be a better candidate to consider a long position.