Is BlackBerry Limited (BB) A Good Stock To Buy?

We at Insider Monkey have gone over 730 13F filings that hedge funds and prominent investors are required to file by the SEC The 13F filings show the funds’ and investors’ portfolio positions as of June 28th. In this article, we look at what those funds think of BlackBerry Limited (NYSE:BB) based on that data.

Is BlackBerry Limited (NYSE:BB) going to take off soon? The best stock pickers are becoming more confident. The number of long hedge fund bets moved up by 2 recently. Our calculations also showed that BB isn’t among the 30 most popular stocks among hedge funds (see the video below). 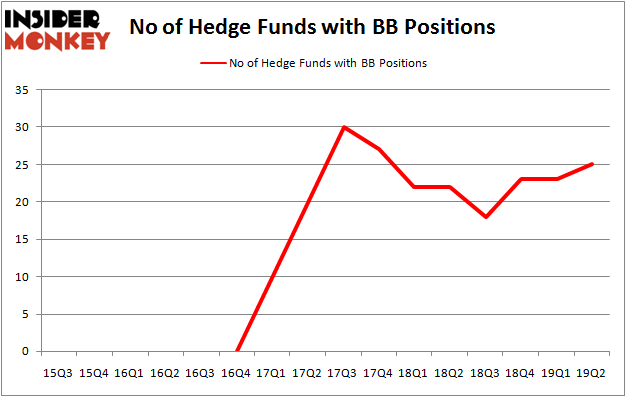 What does smart money think about BlackBerry Limited (NYSE:BB)?

The largest stake in BlackBerry Limited (NYSE:BB) was held by Fairfax Financial Holdings, which reported holding $348.2 million worth of stock at the end of March. It was followed by Renaissance Technologies with a $45.5 million position. Other investors bullish on the company included Kahn Brothers, Iridian Asset Management, and D E Shaw.

As one would reasonably expect, some big names have been driving this bullishness. Kahn Brothers, managed by Irving Kahn, initiated the most valuable position in BlackBerry Limited (NYSE:BB). Kahn Brothers had $41.5 million invested in the company at the end of the quarter. David Cohen and Harold Levy’s Iridian Asset Management also made a $33.1 million investment in the stock during the quarter. The following funds were also among the new BB investors: Dmitry Balyasny’s Balyasny Asset Management, Paul Hondros’s AlphaOne Capital Partners, and Israel Englander’s Millennium Management.