Is Blackbaud, Inc. (BLKB) A Good Stock To Buy?

Blackbaud, Inc. (NASDAQ:BLKB) investors should be aware of a decrease in enthusiasm from smart money recently. BLKB was in 10 hedge funds’ portfolios at the end of the second quarter of 2019. There were 11 hedge funds in our database with BLKB holdings at the end of the previous quarter. Our calculations also showed that BLKB isn’t among the 30 most popular stocks among hedge funds (see the video below). 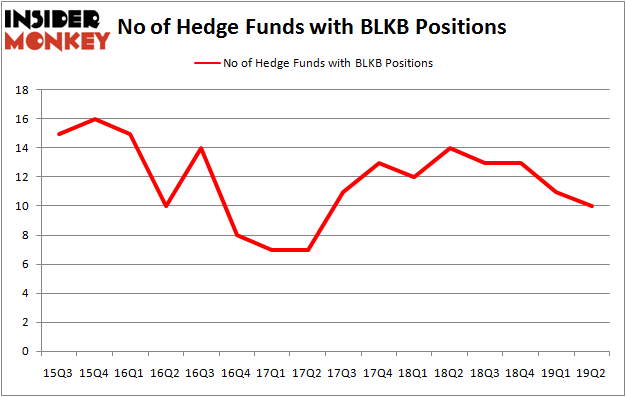 At Q2’s end, a total of 10 of the hedge funds tracked by Insider Monkey were long this stock, a change of -9% from the first quarter of 2019. On the other hand, there were a total of 14 hedge funds with a bullish position in BLKB a year ago. With the smart money’s capital changing hands, there exists a select group of key hedge fund managers who were adding to their stakes substantially (or already accumulated large positions).

According to Insider Monkey’s hedge fund database, Greg Poole’s Echo Street Capital Management has the number one position in Blackbaud, Inc. (NASDAQ:BLKB), worth close to $56.9 million, comprising 1% of its total 13F portfolio. The second most bullish fund manager is GLG Partners, managed by Noam Gottesman, which holds a $9.2 million position; the fund has less than 0.1%% of its 13F portfolio invested in the stock. Other hedge funds and institutional investors that are bullish include Joel Greenblatt’s Gotham Asset Management, Ken Griffin’s Citadel Investment Group and Dmitry Balyasny’s Balyasny Asset Management.

Since Blackbaud, Inc. (NASDAQ:BLKB) has witnessed declining sentiment from the entirety of the hedge funds we track, it’s easy to see that there exists a select few fund managers who were dropping their full holdings in the second quarter. It’s worth mentioning that Renaissance Technologies cut the largest investment of the “upper crust” of funds followed by Insider Monkey, worth an estimated $2.8 million in stock, and John Overdeck and David Siegel’s Two Sigma Advisors was right behind this move, as the fund dropped about $1 million worth. These transactions are intriguing to say the least, as aggregate hedge fund interest fell by 1 funds in the second quarter.

As you can see these stocks had an average of 16.5 hedge funds with bullish positions and the average amount invested in these stocks was $259 million. That figure was $77 million in BLKB’s case. Equity Commonwealth (NYSE:EQC) is the most popular stock in this table. On the other hand PNM Resources, Inc. (NYSE:PNM) is the least popular one with only 13 bullish hedge fund positions. Compared to these stocks Blackbaud, Inc. (NASDAQ:BLKB) is even less popular than PNM. Hedge funds clearly dropped the ball on BLKB as the stock delivered strong returns, though hedge funds’ consensus picks still generated respectable returns. Our calculations showed that top 20 most popular stocks among hedge funds returned 24.4% in 2019 through September 30th and outperformed the S&P 500 ETF (SPY) by 4 percentage points. A small number of hedge funds were also right about betting on BLKB as the stock returned 8.3% during the third quarter and outperformed the market by an even larger margin.