Like everyone else, elite investors make mistakes. Some of their top consensus picks, such as Amazon, Facebook and Alibaba, have not done well in October due to various reasons. Nevertheless, the data show elite investors’ consensus picks have done well on average over the long-term. The top 30 S&P 500 stocks among hedge funds at the end of September 2018 returned an average of 6.7% through November 15th whereas the S&P 500 Index ETF gained only 2.6% during the same period. Because their consensus picks have done well, we pay attention to what elite funds think before doing extensive research on a stock. In this article, we take a closer look at BHP Group Plc (NYSE:BBL) from the perspective of those elite funds.

BHP Group Plc (NYSE:BBL) was in 16 hedge funds’ portfolios at the end of September. BBL shareholders have witnessed an increase in activity from the world’s largest hedge funds in recent months. There were 14 hedge funds in our database with BBL holdings at the end of the previous quarter. Our calculations also showed that BBL isn’t among the 30 most popular stocks among hedge funds.

What have hedge funds been doing with BHP Group Plc (NYSE:BBL)?

At Q3’s end, a total of 16 of the hedge funds tracked by Insider Monkey were long this stock, a change of 14% from one quarter earlier. By comparison, 20 hedge funds held shares or bullish call options in BBL heading into this year. With the smart money’s capital changing hands, there exists a few notable hedge fund managers who were adding to their stakes considerably (or already accumulated large positions). 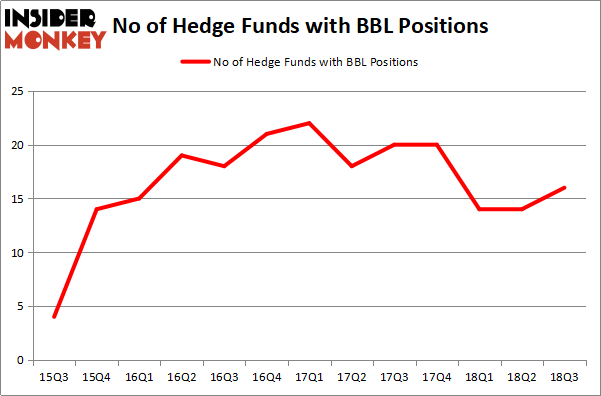 According to Insider Monkey’s hedge fund database, Bernard Horn’s Polaris Capital Management has the number one position in BHP Group Plc (NYSE:BBL), worth close to $204.4 million, amounting to 10.2% of its total 13F portfolio. The second most bullish fund manager is Fisher Asset Management, managed by Ken Fisher, which holds a $198.7 million position; the fund has 0.2% of its 13F portfolio invested in the stock. Other members of the smart money that hold long positions encompass Kenneth Mario Garschina’s Mason Capital Management, Peter Rathjens, Bruce Clarke and John Campbell’s Arrowstreet Capital and Israel Englander’s Millennium Management.

With a general bullishness amongst the heavyweights, some big names have jumped into BHP Group Plc (NYSE:BBL) headfirst. Centenus Global Management, managed by Sara Nainzadeh, established the largest position in BHP Group Plc (NYSE:BBL). Centenus Global Management had $8.4 million invested in the company at the end of the quarter. Jonathan Barrett and Paul Segal’s Luminus Management also made a $8.1 million investment in the stock during the quarter. The other funds with new positions in the stock are Jim Simons’s Renaissance Technologies, Dmitry Balyasny’s Balyasny Asset Management, and Gavin Saitowitz and Cisco J. del Valle’s Springbok Capital.

As you can see these stocks had an average of 28.75 hedge funds with bullish positions and the average amount invested in these stocks was $1447 million. That figure was $815 million in BBL’s case. Altria Group Inc (NYSE:MO) is the most popular stock in this table. On the other hand Royal Bank of Canada (NYSE:RY) is the least popular one with only 17 bullish hedge fund positions. Compared to these stocks BHP Group Plc (NYSE:BBL) is even less popular than RY. Considering that hedge funds aren’t fond of this stock in relation to other companies analyzed in this article, it may be a good idea to analyze it in detail and understand why the smart money isn’t behind this stock. This isn’t necessarily bad news. Although it is possible that hedge funds may think the stock is overpriced and view the stock as a short candidate, they may not be very familiar with the bullish thesis. In either case more research is warranted.