The 700+ hedge funds and money managers tracked by Insider Monkey have already compiled and submitted their 13F filings for the fourth quarter, which unveil their equity positions as of December 31. We went through these filings, fixed typos and other more significant errors and identified the changes in hedge fund positions. Our extensive review of these public filings is finally over, so this article is set to reveal the smart money sentiment towards B&G Foods, Inc. (NYSE:BGS).

B&G Foods, Inc. (NYSE:BGS) was in 10 hedge funds’ portfolios at the end of the fourth quarter of 2018. BGS shareholders have witnessed a decrease in support from the world’s most elite money managers in recent months. There were 13 hedge funds in our database with BGS positions at the end of the previous quarter. Our calculations also showed that bgs isn’t among the 30 most popular stocks among hedge funds.

At Q4’s end, a total of 10 of the hedge funds tracked by Insider Monkey were bullish on this stock, a change of -23% from the previous quarter. By comparison, 11 hedge funds held shares or bullish call options in BGS a year ago. With hedge funds’ sentiment swirling, there exists a few notable hedge fund managers who were increasing their holdings meaningfully (or already accumulated large positions). 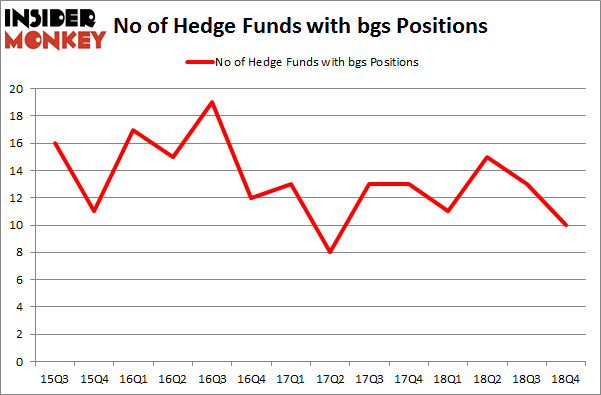 More specifically, Diamond Hill Capital was the largest shareholder of B&G Foods, Inc. (NYSE:BGS), with a stake worth $65.7 million reported as of the end of September. Trailing Diamond Hill Capital was Cardinal Capital, which amassed a stake valued at $54 million. Citadel Investment Group, Balyasny Asset Management, and Fisher Asset Management were also very fond of the stock, giving the stock large weights in their portfolios.

Due to the fact that B&G Foods, Inc. (NYSE:BGS) has witnessed bearish sentiment from hedge fund managers, it’s easy to see that there were a few money managers that elected to cut their entire stakes heading into Q3. Intriguingly, Ken Griffin’s Citadel Investment Group sold off the largest stake of the “upper crust” of funds watched by Insider Monkey, comprising about $5.3 million in call options, and Matthew Hulsizer’s PEAK6 Capital Management was right behind this move, as the fund sold off about $0.7 million worth. These transactions are interesting, as aggregate hedge fund interest dropped by 3 funds heading into Q3.

As you can see these stocks had an average of 14.5 hedge funds with bullish positions and the average amount invested in these stocks was $85 million. That figure was $127 million in BGS’s case. Banner Corporation (NASDAQ:BANR) is the most popular stock in this table. On the other hand Urban Edge Properties (NYSE:UE) is the least popular one with only 12 bullish hedge fund positions. Compared to these stocks B&G Foods, Inc. (NYSE:BGS) is even less popular than UE. Hedge funds dodged a bullet by taking a bearish stance towards BGS. Our calculations showed that the top 15 most popular hedge fund stocks returned 24.2% through April 22nd and outperformed the S&P 500 ETF (SPY) by more than 7 percentage points. Unfortunately BGS wasn’t nearly as popular as these 15 stock (hedge fund sentiment was very bearish); BGS investors were disappointed as the stock returned -12.7% and underperformed the market. If you are interested in investing in large cap stocks with huge upside potential, you should check out the top 15 most popular stocks) among hedge funds as 13 of these stocks already outperformed the market this year.