Berkshire Hills Bancorp, Inc. (NYSE:BHLB) was in 13 hedge funds’ portfolios at the end of March. BHLB has experienced an increase in activity from the world’s largest hedge funds recently. There were 11 hedge funds in our database with BHLB holdings at the end of the previous quarter. Our calculations also showed that BHLB isn’t among the 30 most popular stocks among hedge funds.

To the average investor there are dozens of tools stock market investors put to use to evaluate publicly traded companies. Some of the most under-the-radar tools are hedge fund and insider trading sentiment. We have shown that, historically, those who follow the best picks of the top fund managers can outpace the S&P 500 by a solid margin (see the details here). 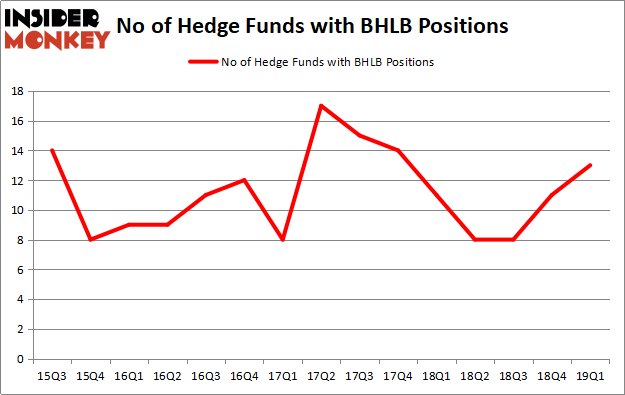 The largest stake in Berkshire Hills Bancorp, Inc. (NYSE:BHLB) was held by EJF Capital, which reported holding $14.2 million worth of stock at the end of March. It was followed by Renaissance Technologies with a $13.5 million position. Other investors bullish on the company included Millennium Management, Prospector Partners, and Marshall Wace LLP.

Let’s check out hedge fund activity in other stocks – not necessarily in the same industry as Berkshire Hills Bancorp, Inc. (NYSE:BHLB) but similarly valued. These stocks are OceanFirst Financial Corp. (NASDAQ:OCFC), Camping World Holdings, Inc. (NYSE:CWH), The Marcus Corporation (NYSE:MCS), and US Ecology Inc. (NASDAQ:ECOL). All of these stocks’ market caps are closest to BHLB’s market cap.

As you can see these stocks had an average of 12 hedge funds with bullish positions and the average amount invested in these stocks was $69 million. That figure was $51 million in BHLB’s case. The Marcus Corporation (NYSE:MCS) is the most popular stock in this table. On the other hand US Ecology Inc. (NASDAQ:ECOL) is the least popular one with only 9 bullish hedge fund positions. Berkshire Hills Bancorp, Inc. (NYSE:BHLB) is not the most popular stock in this group but hedge fund interest is still above average. Our calculations showed that top 20 most popular stocks among hedge funds returned 6.2% in Q2 through June 19th and outperformed the S&P 500 ETF (SPY) by nearly 3 percentage points. Hedge funds were also right about betting on BHLB as the stock returned 13.1% during the same period and outperformed the market by an even larger margin. Hedge funds were rewarded for their relative bullishness.