In these volatile markets we scrutinize hedge fund filings to get a reading on which direction each stock might be going. A whopping number of 13F filings filed with U.S. Securities and Exchange Commission has been processed by Insider Monkey so that individual investors can look at the overall hedge fund sentiment towards the stocks included in their watchlists. These freshly-submitted public filings disclose money managers’ equity positions as of the end of the three-month period that ended December 31, so let’s proceed with the discussion of the hedge fund sentiment on Becton, Dickinson and Company (NYSE:BDX).

Becton, Dickinson and Company (NYSE:BDX) investors should pay attention to a decrease in hedge fund sentiment lately. BDX was in 50 hedge funds’ portfolios at the end of the fourth quarter of 2019. There were 51 hedge funds in our database with BDX holdings at the end of the previous quarter. Our calculations also showed that BDX isn’t among the 30 most popular stocks among hedge funds (click for Q4 rankings and see the video below for Q3 rankings).

We leave no stone unturned when looking for the next great investment idea. For example Europe is set to become the world’s largest cannabis market, so we check out this European marijuana stock pitch. We read hedge fund investor letters and listen to stock pitches at hedge fund conferences, and and go through short-term trade recommendations like this one. We even check out the recommendations of services with hard to believe track records. In January, we recommended a long position in one of the most shorted stocks in the market, and that stock returned more than 50% despite the large losses in the market since our recommendation. With all of this in mind we’re going to take a look at the fresh hedge fund action surrounding Becton, Dickinson and Company (NYSE:BDX).

How have hedgies been trading Becton, Dickinson and Company (NYSE:BDX)?

At Q4’s end, a total of 50 of the hedge funds tracked by Insider Monkey were bullish on this stock, a change of -2% from the third quarter of 2019. By comparison, 37 hedge funds held shares or bullish call options in BDX a year ago. With hedge funds’ positions undergoing their usual ebb and flow, there exists an “upper tier” of noteworthy hedge fund managers who were upping their stakes significantly (or already accumulated large positions). 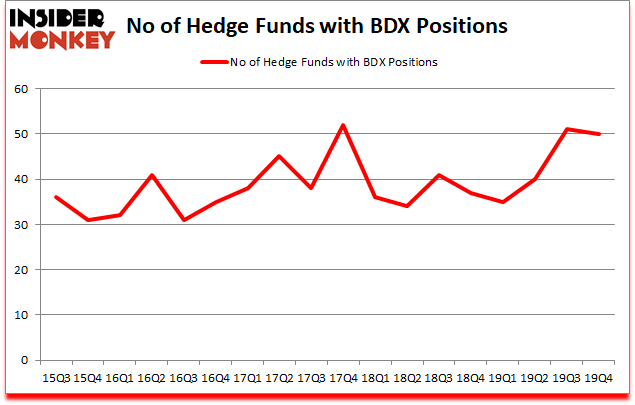 More specifically, Cantillon Capital Management was the largest shareholder of Becton, Dickinson and Company (NYSE:BDX), with a stake worth $327.9 million reported as of the end of September. Trailing Cantillon Capital Management was Millennium Management, which amassed a stake valued at $163.8 million. Generation Investment Management, Two Sigma Advisors, and Intermede Investment Partners were also very fond of the stock, becoming one of the largest hedge fund holders of the company. In terms of the portfolio weights assigned to each position Endurant Capital Management allocated the biggest weight to Becton, Dickinson and Company (NYSE:BDX), around 4.89% of its 13F portfolio. Intermede Investment Partners is also relatively very bullish on the stock, setting aside 4.41 percent of its 13F equity portfolio to BDX.

Since Becton, Dickinson and Company (NYSE:BDX) has faced a decline in interest from the entirety of the hedge funds we track, we can see that there were a few hedge funds that elected to cut their positions entirely heading into Q4. Interestingly, Doug Silverman and Alexander Klabin’s Senator Investment Group cut the biggest position of the 750 funds followed by Insider Monkey, totaling close to $25.3 million in stock. Krishen Sud’s fund, Sivik Global Healthcare, also sold off its stock, about $5.1 million worth. These bearish behaviors are interesting, as aggregate hedge fund interest dropped by 1 funds heading into Q4.

As you can see these stocks had an average of 35.75 hedge funds with bullish positions and the average amount invested in these stocks was $1449 million. That figure was $1447 million in BDX’s case. The TJX Companies, Inc. (NYSE:TJX) is the most popular stock in this table. On the other hand Ambev SA (NYSE:ABEV) is the least popular one with only 14 bullish hedge fund positions. Becton, Dickinson and Company (NYSE:BDX) is not the most popular stock in this group but hedge fund interest is still above average. This is a slightly positive signal but we’d rather spend our time researching stocks that hedge funds are piling on. Our calculations showed that top 20 most popular stocks among hedge funds returned 41.3% in 2019 and outperformed the S&P 500 ETF (SPY) by 10.1 percentage points. These stocks lost 12.9% in 2020 through March 9th but beat the market by 1.9 percentage points. Unfortunately BDX wasn’t nearly as popular as these 20 stocks and hedge funds that were betting on BDX were disappointed as the stock returned -14.9% during the same time period and underperformed the market. If you are interested in investing in large cap stocks with huge upside potential, you should check out the top 20 most popular stocks among hedge funds as many of these stocks already outperformed the market so far this year.