Is Banner Corporation (BANR) A Good Stock To Buy?

Is Banner Corporation (NASDAQ:BANR) going to take off soon? Hedge funds are becoming less confident. The number of long hedge fund positions were trimmed by 2 recently. Our calculations also showed that banr isn’t among the 30 most popular stocks among hedge funds. BANR was in 18 hedge funds’ portfolios at the end of December. There were 20 hedge funds in our database with BANR positions at the end of the previous quarter. 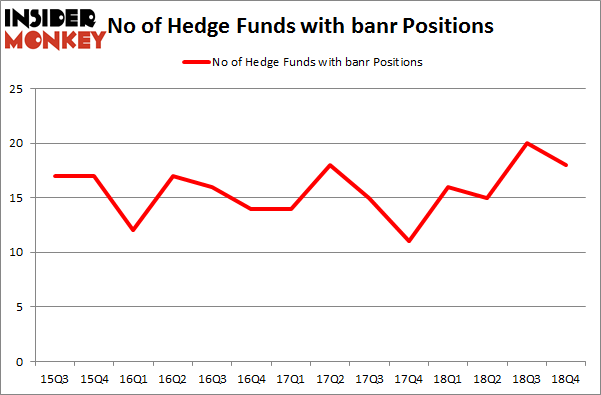 The largest stake in Banner Corporation (NASDAQ:BANR) was held by Citadel Investment Group, which reported holding $14.5 million worth of stock at the end of September. It was followed by Millennium Management with a $14 million position. Other investors bullish on the company included Elizabeth Park Capital Management, Forest Hill Capital, and GLG Partners.

Since Banner Corporation (NASDAQ:BANR) has experienced a decline in interest from the smart money, we can see that there lies a certain “tier” of hedgies who sold off their positions entirely by the end of the third quarter. At the top of the heap, Brandon Haley’s Holocene Advisors dropped the largest stake of all the hedgies monitored by Insider Monkey, worth about $0.7 million in call options, and Ken Griffin’s Citadel Investment Group was right behind this move, as the fund sold off about $0.5 million worth. These bearish behaviors are intriguing to say the least, as total hedge fund interest fell by 2 funds by the end of the third quarter.

As you can see these stocks had an average of 13.25 hedge funds with bullish positions and the average amount invested in these stocks was $82 million. That figure was $85 million in BANR’s case. Tanger Factory Outlet Centers Inc. (NYSE:SKT) is the most popular stock in this table. On the other hand Urban Edge Properties (NYSE:UE) is the least popular one with only 12 bullish hedge fund positions. Compared to these stocks Banner Corporation (NASDAQ:BANR) is more popular among hedge funds. Our calculations showed that top 15 most popular stocks) among hedge funds returned 24.2% through April 22nd and outperformed the S&P 500 ETF (SPY) by more than 7 percentage points. Unfortunately BANR wasn’t nearly as popular as these 15 stock and hedge funds that were betting on BANR were disappointed as the stock returned 2.7% and underperformed the market. If you are interested in investing in large cap stocks with huge upside potential, you should check out the top 15 most popular stocks) among hedge funds as 13 of these stocks already outperformed the market this year.