Investing in small cap stocks has historically been a way to outperform the market, as small cap companies typically grow faster on average than the blue chips. That outperformance comes with a price, however, as there are occasional periods of higher volatility. The last 12 months is one of those periods, as the Russell 2000 ETF (IWM) has underperformed the larger S&P 500 ETF (SPY) by more than 10 percentage points. Given that the funds we track tend to have a disproportionate amount of their portfolios in smaller cap stocks, they have seen some volatility in their portfolios too. Actually their moves are potentially one of the factors that contributed to this volatility. In this article, we use our extensive database of hedge fund holdings to find out what the smart money thinks of Banco Santander, S.A. (NYSE:SAN).

Is Banco Santander, S.A. (NYSE:SAN) the right pick for your portfolio? Investors who are in the know are becoming less confident. The number of bullish hedge fund positions decreased by 1 lately. Our calculations also showed that SAN isn’t among the 30 most popular stocks among hedge funds. SAN was in 22 hedge funds’ portfolios at the end of June. There were 23 hedge funds in our database with SAN positions at the end of the previous quarter.

In the financial world there are a lot of metrics stock market investors have at their disposal to value publicly traded companies. Two of the less known metrics are hedge fund and insider trading activity. Our experts have shown that, historically, those who follow the top picks of the best investment managers can outperform the broader indices by a significant margin (see the details here).

Unlike some fund managers who are betting on Dow reaching 40000 in a year, our long-short investment strategy doesn’t rely on bull markets to deliver double digit returns. We only rely on hedge fund buy/sell signals. Let’s take a glance at the key hedge fund action regarding Banco Santander, S.A. (NYSE:SAN).

Heading into the third quarter of 2019, a total of 22 of the hedge funds tracked by Insider Monkey were bullish on this stock, a change of -4% from the previous quarter. The graph below displays the number of hedge funds with bullish position in SAN over the last 16 quarters. With the smart money’s sentiment swirling, there exists a select group of noteworthy hedge fund managers who were increasing their stakes considerably (or already accumulated large positions). 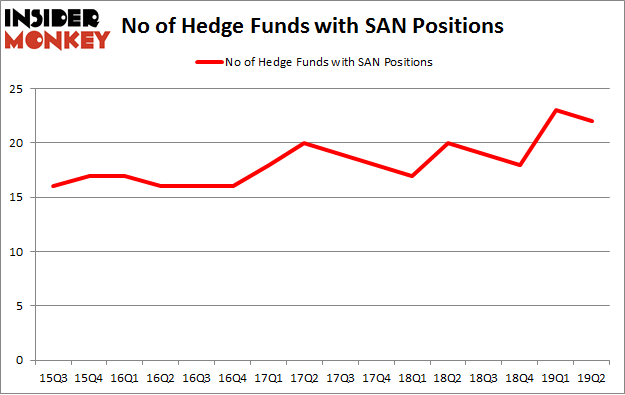 According to Insider Monkey’s hedge fund database, Ken Fisher’s Fisher Asset Management has the biggest position in Banco Santander, S.A. (NYSE:SAN), worth close to $389.9 million, amounting to 0.4% of its total 13F portfolio. The second most bullish fund manager is Jim Simons of Renaissance Technologies, with a $64.6 million position; 0.1% of its 13F portfolio is allocated to the company. Remaining members of the smart money with similar optimism encompass Cliff Asness’s AQR Capital Management and Robert Emil Zoellner’s Alpine Associates.

Judging by the fact that Banco Santander, S.A. (NYSE:SAN) has experienced declining sentiment from the aggregate hedge fund industry, it’s easy to see that there were a few fund managers who sold off their positions entirely in the second quarter. It’s worth mentioning that Peter Rathjens, Bruce Clarke and John Campbell’s Arrowstreet Capital sold off the biggest investment of the “upper crust” of funds monitored by Insider Monkey, comprising an estimated $8.5 million in stock. Matthew Tewksbury’s fund, Stevens Capital Management, also dropped its stock, about $0.7 million worth. These transactions are intriguing to say the least, as total hedge fund interest fell by 1 funds in the second quarter.

As you can see these stocks had an average of 34.75 hedge funds with bullish positions and the average amount invested in these stocks was $1392 million. That figure was $702 million in SAN’s case. Morgan Stanley (NYSE:MS) is the most popular stock in this table. On the other hand Ambev SA (NYSE:ABEV) is the least popular one with only 16 bullish hedge fund positions. Banco Santander, S.A. (NYSE:SAN) is not the least popular stock in this group but hedge fund interest is still below average. This is a slightly negative signal and we’d rather spend our time researching stocks that hedge funds are piling on. Our calculations showed that top 20 most popular stocks among hedge funds returned 24.4% in 2019 through September 30th and outperformed the S&P 500 ETF (SPY) by 4 percentage points. Unfortunately SAN wasn’t nearly as popular as these 20 stocks (hedge fund sentiment was quite bearish); SAN investors were disappointed as the stock returned -12.2% during the third quarter and underperformed the market. If you are interested in investing in large cap stocks with huge upside potential, you should check out the top 20 most popular stocks among hedge funds as many of these stocks already outperformed the market so far in 2019.