The 700+ hedge funds and money managers tracked by Insider Monkey have already compiled and submitted their 13F filings for the third quarter, which unveil their equity positions as of September 30. We went through these filings, fixed typos and other more significant errors and identified the changes in hedge fund positions. Our extensive review of these public filings is finally over, so this article is set to reveal the smart money sentiment towards Banco Santander, S.A. (ADR) (NYSE:SAN).

Hedge fund interest in Banco Santander, S.A. (ADR) (NYSE:SAN) shares was flat at the end of last quarter, with 16 hedge funds bullish on the company. The level and the change in hedge fund popularity aren’t the only variables you need to analyze to decipher hedge funds’ perspectives. A stock may witness a boost in popularity but it may still be less popular than similarly priced stocks. That’s why at the end of this article we will examine companies such as Itau Unibanco Holding SA (ADR) (NYSE:ITUB), BlackRock, Inc. (NYSE:BLK), and The Dow Chemical Company (NYSE:DOW) to gather more data points. 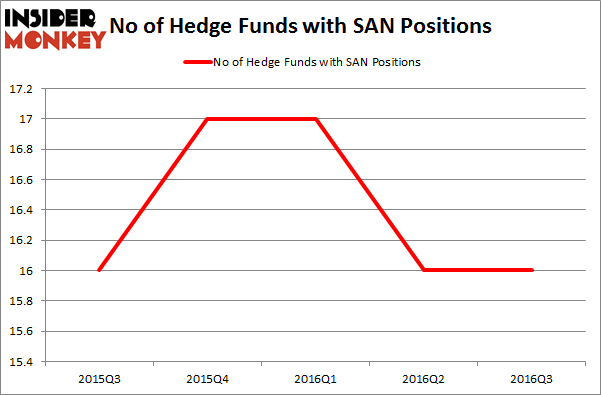 According to Insider Monkey’s hedge fund database, David Blood and Al Gore’s Generation Investment Management has the biggest position in Banco Santander, S.A. (ADR) (NYSE:SAN), worth close to $83.9 million. The second largest stake is held by AQR Capital Management, led by Cliff Asness, holding a $57.6 million position. Remaining peers that are bullish encompass John W. Rogers’ Ariel Investments, Renaissance Technologies, one of the largest hedge funds in the world and D. E. Shaw’s D E Shaw. We should note that none of these hedge funds are among our list of the 100 best performing hedge funds which is based on the performance of their 13F long positions in non-microcap stocks.

Walter Investment Management Corp (WAC): Are Hedge Funds Right About This Stock...
Monthly Newsletter Strategy
Download a free copy of our newsletter and see the details inside!
Hedge Fund Resource Center
Related News
Why Twitter, eBay, Alibaba, and Two Other Stocks Are Trending Why Investors Are Buzzing About These 5 Stocks Today Banking Stocks Are in the Spotlight after Fed’s Stress Tests Do Hedge Funds Love Banco Santander, S.A. (ADR) (SAN)? 5 Ultra-High Dividend Stocks Hedge Funds Are Betting On Credit Suisse Group AG (ADR) (CS): Hedge Fund and Insider Sentiment Unchanged, What Should You Do? Lloyds Banking Group PLC (ADR) (LYG): Are Hedge Funds Right About This Stock? 11 Best Science YouTube Channels To Watch 10 Most Famous Cubist Paintings 5 Countries That Have the Most Drones
Billionaire Hedge Funds