We at Insider Monkey have gone over 730 13F filings that hedge funds and prominent investors are required to file by the SEC The 13F filings show the funds’ and investors’ portfolio positions as of June 28th. In this article, we look at what those funds think of Avis Budget Group Inc. (NASDAQ:CAR) based on that data.

Is Avis Budget Group Inc. (NASDAQ:CAR) a healthy stock for your portfolio? Prominent investors are selling. The number of long hedge fund bets dropped by 7 lately. Our calculations also showed that CAR isn’t among the 30 most popular stocks among hedge funds (view the video below). CAR was in 21 hedge funds’ portfolios at the end of June. There were 28 hedge funds in our database with CAR holdings at the end of the previous quarter.

What have hedge funds been doing with Avis Budget Group Inc. (NASDAQ:CAR)? 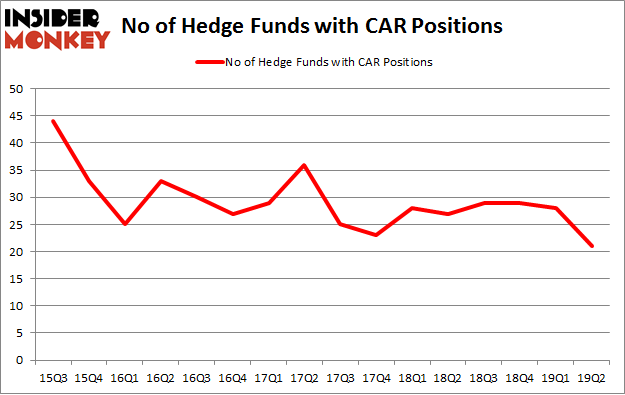 Because Avis Budget Group Inc. (NASDAQ:CAR) has faced declining sentiment from the smart money, it’s easy to see that there were a few hedgies that slashed their entire stakes heading into Q3. Interestingly, Andrew Feldstein and Stephen Siderow’s Blue Mountain Capital cut the biggest investment of all the hedgies monitored by Insider Monkey, totaling about $12 million in stock, and Robert Pohly’s Samlyn Capital was right behind this move, as the fund said goodbye to about $7.8 million worth. These moves are interesting, as total hedge fund interest dropped by 7 funds heading into Q3.

As you can see these stocks had an average of 14 hedge funds with bullish positions and the average amount invested in these stocks was $232 million. That figure was $1046 million in CAR’s case. Trinity Industries, Inc. (NYSE:TRN) is the most popular stock in this table. On the other hand Main Street Capital Corporation (NYSE:MAIN) is the least popular one with only 4 bullish hedge fund positions. Avis Budget Group Inc. (NASDAQ:CAR) is not the most popular stock in this group but hedge fund interest is still above average. This is a slightly positive signal but we’d rather spend our time researching stocks that hedge funds are piling on. Our calculations showed that top 20 most popular stocks among hedge funds returned 24.4% in 2019 through September 30th and outperformed the S&P 500 ETF (SPY) by 4 percentage points. Unfortunately CAR wasn’t nearly as popular as these 20 stocks and hedge funds that were betting on CAR were disappointed as the stock returned -19.6% during the third quarter and underperformed the market. If you are interested in investing in large cap stocks with huge upside potential, you should check out the top 20 most popular stocks among hedge funds as many of these stocks already outperformed the market so far this year.