Is AutoNation, Inc. (AN) A Good Stock To Buy?

AutoNation, Inc. (NYSE:AN) was in 22 hedge funds’ portfolios at the end of December. AN has seen a decrease in hedge fund sentiment in recent months. There were 24 hedge funds in our database with AN holdings at the end of the previous quarter. Our calculations also showed that an isn’t among the 30 most popular stocks among hedge funds.

How have hedgies been trading AutoNation, Inc. (NYSE:AN)?

At the end of the fourth quarter, a total of 22 of the hedge funds tracked by Insider Monkey held long positions in this stock, a change of -8% from the previous quarter. By comparison, 23 hedge funds held shares or bullish call options in AN a year ago. With hedge funds’ positions undergoing their usual ebb and flow, there exists an “upper tier” of key hedge fund managers who were upping their stakes meaningfully (or already accumulated large positions). 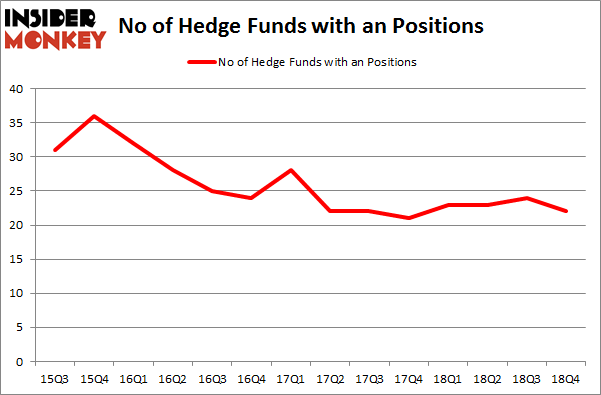 Among these funds, ESL Investments held the most valuable stake in AutoNation, Inc. (NYSE:AN), which was worth $129 million at the end of the third quarter. On the second spot was Arlington Value Capital which amassed $113 million worth of shares. Moreover, Bill & Melinda Gates Foundation Trust, Magnolia Capital Fund, and GAMCO Investors were also bullish on AutoNation, Inc. (NYSE:AN), allocating a large percentage of their portfolios to this stock.

Judging by the fact that AutoNation, Inc. (NYSE:AN) has witnessed declining sentiment from hedge fund managers, logic holds that there is a sect of money managers that elected to cut their entire stakes last quarter. Interestingly, Israel Englander’s Millennium Management said goodbye to the biggest position of the 700 funds watched by Insider Monkey, comprising about $11 million in stock, and Michael Moriarty’s Teewinot Capital Advisers was right behind this move, as the fund dropped about $5.7 million worth. These moves are intriguing to say the least, as total hedge fund interest fell by 2 funds last quarter.