Is Arrow Electronics (ARW) A Good Stock To Buy?

A market correction in the fourth quarter, spurred by a number of global macroeconomic concerns and rising interest rates ended up having a negative impact on the markets and many hedge funds as a result. The stocks of smaller companies were especially hard hit during this time as investors fled to investments seen as being safer. This is evident in the fact that the Russell 2000 ETF underperformed the S&P 500 ETF by nearly 7 percentage points during the fourth quarter. We also received indications that hedge funds were trimming their positions amid the market volatility and uncertainty, and given their greater inclination towards smaller cap stocks than other investors, it follows that a stronger sell-off occurred in those stocks. Let’s study the hedge fund sentiment to see how those concerns affected their ownership of Arrow Electronics, Inc. (NYSE:ARW) during the quarter.

Is Arrow Electronics, Inc. (NYSE:ARW) an outstanding investment today? The smart money is becoming less hopeful. The number of long hedge fund positions went down by 2 lately. Our calculations also showed that ARW isn’t among the 30 most popular stocks among hedge funds. ARW was in 21 hedge funds’ portfolios at the end of December. There were 23 hedge funds in our database with ARW holdings at the end of the previous quarter.

At the moment there are dozens of gauges stock market investors have at their disposal to evaluate stocks. A duo of the most underrated gauges are hedge fund and insider trading moves. Our researchers have shown that, historically, those who follow the best picks of the elite hedge fund managers can outclass the S&P 500 by a significant margin (see the details here).

What have hedge funds been doing with Arrow Electronics, Inc. (NYSE:ARW)? 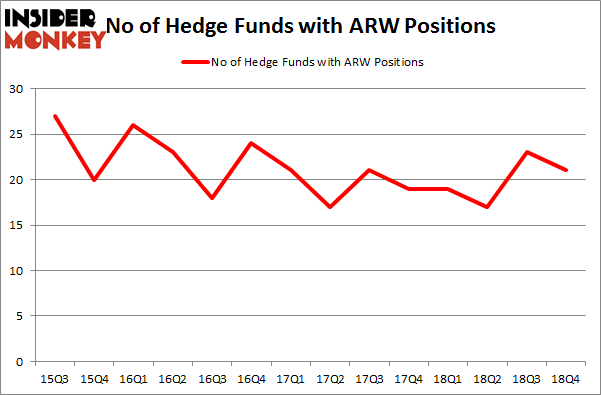 More specifically, Citadel Investment Group was the largest shareholder of Arrow Electronics, Inc. (NYSE:ARW), with a stake worth $111.8 million reported as of the end of September. Trailing Citadel Investment Group was AQR Capital Management, which amassed a stake valued at $111.6 million. GMT Capital, Pzena Investment Management, and Carlson Capital were also very fond of the stock, giving the stock large weights in their portfolios.

Due to the fact that Arrow Electronics, Inc. (NYSE:ARW) has witnessed falling interest from the entirety of the hedge funds we track, it’s safe to say that there exists a select few money managers that elected to cut their full holdings heading into Q3. Intriguingly, Jim Simons’s Renaissance Technologies cut the largest stake of the 700 funds tracked by Insider Monkey, totaling an estimated $4.3 million in stock, and John Thiessen’s Vertex One Asset Management was right behind this move, as the fund sold off about $1.6 million worth. These bearish behaviors are intriguing to say the least, as aggregate hedge fund interest fell by 2 funds heading into Q3.

As you can see these stocks had an average of 25.5 hedge funds with bullish positions and the average amount invested in these stocks was $503 million. That figure was $355 million in ARW’s case. Foot Locker, Inc. (NYSE:FL) is the most popular stock in this table. On the other hand Pool Corporation (NASDAQ:POOL) is the least popular one with only 17 bullish hedge fund positions. Arrow Electronics, Inc. (NYSE:ARW) is not the least popular stock in this group but hedge fund interest is still below average. Our calculations showed that the top 15 most popular stocks among hedge funds returned 21.3% year-to-date through April 8th and outperformed the S&P 500 ETF (SPY) by more than 5 percentage points. Hedge funds were also right about betting on ARW, though not to the same extent, as the stock returned 20.5% and outperformed the market as well.