Is Array Biopharma Inc (ARRY) A Good Stock To Buy?

The fourth quarter was a rough one for most investors, as fears of a rising interest rate environment in the U.S, a trade war with China, and a more or less stagnant Europe, weighed heavily on the minds of investors. Both the S&P 500 and Russell 2000 sank as a result, with the Russell 2000, which is composed of smaller companies, being hit especially hard. This was primarily due to hedge funds, which are big supporters of small-cap stocks, pulling some of their capital out of the volatile markets during this time. Let’s look at how this market volatility affected the sentiment of hedge funds towards Array Biopharma Inc (NASDAQ:ARRY), and what that likely means for the prospects of the company and its stock.

Array Biopharma Inc (NASDAQ:ARRY) investors should be aware of a decrease in hedge fund interest recently. Our calculations also showed that ARRY isn’t among the 30 most popular stocks among hedge funds.

In the eyes of most shareholders, hedge funds are viewed as worthless, old financial vehicles of yesteryear. While there are greater than 8,000 funds trading at the moment, Our researchers hone in on the upper echelon of this group, about 700 funds. These money managers command most of the smart money’s total capital, and by keeping an eye on their first-class stock picks, Insider Monkey has brought to light a number of investment strategies that have historically beaten the S&P 500 index. Insider Monkey’s flagship hedge fund strategy exceeded the S&P 500 index by 6 percentage points per annum since its inception in May 2014 through early November 2018. We were able to generate large returns even by identifying short candidates. Our portfolio of short stocks lost 24% since February 2017 (through December 3rd) even though the market was up nearly 23% during the same period. We just shared a list of 11 short targets in our latest quarterly update.

At the end of the third quarter, a total of 30 of the hedge funds tracked by Insider Monkey held long positions in this stock, a change of -3% from one quarter earlier. The graph below displays the number of hedge funds with bullish position in ARRY over the last 13 quarters. With hedgies’ positions undergoing their usual ebb and flow, there exists an “upper tier” of notable hedge fund managers who were upping their stakes considerably (or already accumulated large positions). 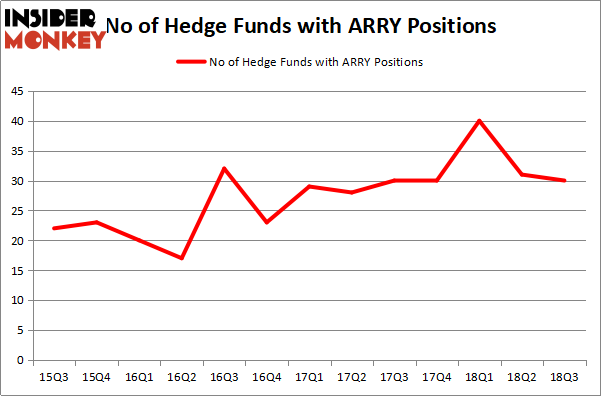 More specifically, Redmile Group was the largest shareholder of Array Biopharma Inc (NASDAQ:ARRY), with a stake worth $241.8 million reported as of the end of September. Trailing Redmile Group was Biotechnology Value Fund / BVF Inc, which amassed a stake valued at $95.6 million. Baker Bros. Advisors, Farallon Capital, and OrbiMed Advisors were also very fond of the stock, giving the stock large weights in their portfolios.

Because Array Biopharma Inc (NASDAQ:ARRY) has faced a decline in interest from the entirety of the hedge funds we track, it’s safe to say that there was a specific group of funds who were dropping their positions entirely last quarter. At the top of the heap, Jim Simons’s Renaissance Technologies sold off the largest stake of the 700 funds monitored by Insider Monkey, valued at close to $9.1 million in stock, and Ari Zweiman’s 683 Capital Partners was right behind this move, as the fund sold off about $7.6 million worth. These moves are intriguing to say the least, as total hedge fund interest fell by 1 funds last quarter.

As you can see these stocks had an average of 17.5 hedge funds with bullish positions and the average amount invested in these stocks was $183 million. That figure was $816 million in ARRY’s case. LHC Group, Inc. (NASDAQ:LHCG) is the most popular stock in this table. On the other hand BancorpSouth Bank (NYSE:BXS) is the least popular one with only 7 bullish hedge fund positions. Compared to these stocks Array Biopharma Inc (NASDAQ:ARRY) is more popular among hedge funds. Considering that hedge funds are fond of this stock in relation to its market cap peers, it may be a good idea to analyze it in detail and potentially include it in your portfolio.