Armada Hoffler Properties Inc (NYSE:AHH) was in 9 hedge funds’ portfolios at the end of June. AHH shareholders have witnessed a decrease in hedge fund sentiment recently. There were 11 hedge funds in our database with AHH positions at the end of the previous quarter. Our calculations also showed that AHH isn’t among the 30 most popular stocks among hedge funds (see the video below).

How have hedgies been trading Armada Hoffler Properties Inc (NYSE:AHH)?

Heading into the third quarter of 2019, a total of 9 of the hedge funds tracked by Insider Monkey were long this stock, a change of -18% from one quarter earlier. Below, you can check out the change in hedge fund sentiment towards AHH over the last 16 quarters. With the smart money’s positions undergoing their usual ebb and flow, there exists a select group of key hedge fund managers who were increasing their holdings substantially (or already accumulated large positions). 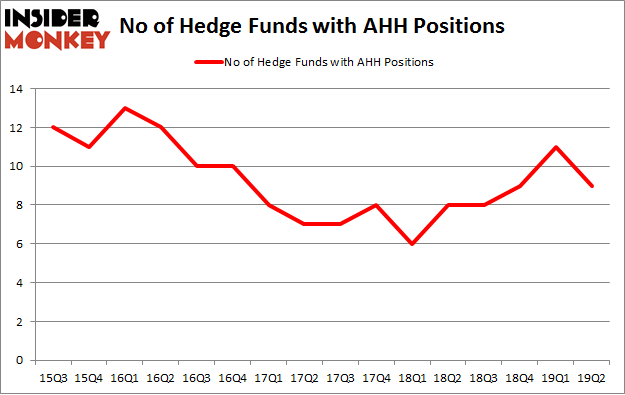 The largest stake in Armada Hoffler Properties Inc (NYSE:AHH) was held by Renaissance Technologies, which reported holding $57.9 million worth of stock at the end of March. It was followed by Royce & Associates with a $2.9 million position. Other investors bullish on the company included Springbok Capital, AQR Capital Management, and Millennium Management.

Seeing as Armada Hoffler Properties Inc (NYSE:AHH) has experienced a decline in interest from hedge fund managers, logic holds that there was a specific group of hedge funds who sold off their positions entirely heading into Q3. At the top of the heap, David Costen Haley’s HBK Investments sold off the largest stake of all the hedgies tracked by Insider Monkey, comprising close to $0.2 million in stock. Benjamin A. Smith’s fund, Laurion Capital Management, also said goodbye to its stock, about $0.2 million worth. These moves are important to note, as aggregate hedge fund interest fell by 2 funds heading into Q3.

As you can see these stocks had an average of 13 hedge funds with bullish positions and the average amount invested in these stocks was $73 million. That figure was $66 million in AHH’s case. Sykes Enterprises, Incorporated (NASDAQ:SYKE) is the most popular stock in this table. On the other hand Huron Consulting Group Inc.(NASDAQ:HURN) is the least popular one with only 11 bullish hedge fund positions. Compared to these stocks Armada Hoffler Properties Inc (NYSE:AHH) is even less popular than HURN. Hedge funds clearly dropped the ball on AHH as the stock delivered strong returns, though hedge funds’ consensus picks still generated respectable returns. Our calculations showed that top 20 most popular stocks among hedge funds returned 24.4% in 2019 through September 30th and outperformed the S&P 500 ETF (SPY) by 4 percentage points. A small number of hedge funds were also right about betting on AHH as the stock returned 10.6% during the third quarter and outperformed the market by an even larger margin.