Individual investors do not usually have the necessary resources to properly research an investment opportunity. As a result, most investors pick their illusory “winners” by making a superficial analysis that leads to poor returns on aggregate. Since stock returns aren’t usually evenly distributed and index returns are more affected by a few outlier stocks (i.e. the FAANG stocks dominating and driving the S&P 500 Index’s returns in recent years), more than 50% of stocks in the S&P 500 underperform the benchmark. Hence, if you randomly pick a stock, there is a greater than 50% chance that you’ll fail to beat the market. At the same time, the 30 most favored S&P 500 stocks by the hedge funds monitored by Insider Monkey generated a return of 15.1% over the last 12 months (vs. a 5.6% gain for the SPY), with 53% of these stocks outperforming the benchmark. Hedge funds do make some bad bets but piggybacking their moves can beat the broader market on average. That’s why we are going to go over recent hedge fund activity in Arlington Asset Investment Corp (NYSE:AI).

Hedge fund interest in Arlington Asset Investment Corp (NYSE:AI) shares was flat during the last quarter. A couple of the stock’s biggest bulls were buying shares however. Billionaire Ken Griffin’s Citadel Investment raised its position by 139% to 1.03 million shares during Q2. After opening a small position in the stock in Q1, Mike Vranos’ Ellington raised the size of that holding by another 636% in Q2, to 105,000 shares. It’s not just hedge funds that are interested in Arlington. The company’s own insiders have been buying up shares lately, which were hit hard in October like those of so many other stocks. Arlington landed on our countdown of The 25 Biggest Insider Purchases in October, as President and CEO J. Rick Tonkel Jr. bought 10,000 shares of the company on October 3.

At Q3’s end, a total of 7 of the hedge funds tracked by Insider Monkey were long this stock, unchanged from the second quarter of 2018. The graph below displays the number of hedge funds with bullish positions in AI over the last 6 quarters. With the smart money’s positions undergoing their usual ebb and flow, there exists a select group of noteworthy hedge fund managers who were upping their holdings meaningfully (or already accumulated large positions). 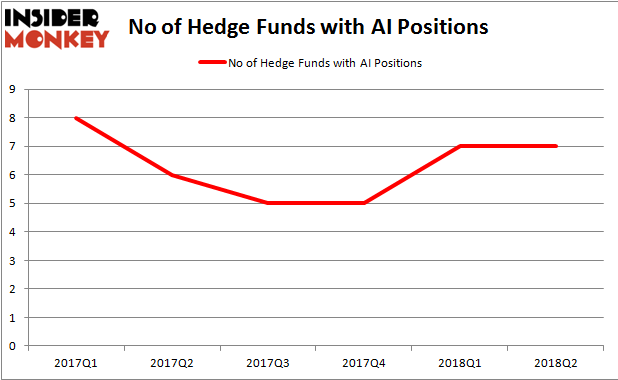 Ken Griffin’s Citadel Investment Group was the largest shareholder of Arlington Asset Investment Corp (NYSE:AI), with a stake worth $10.6 million reported as of the end of June. Trailing Citadel Investment Group was Two Sigma Advisors, which amassed a stake valued at $1.3 million. Ellington, Blue Mountain Capital, and PEAK6 Capital Management were also very fond of the stock, giving the stock large weights in their portfolios.

We view hedge fund activity in the stock unfavorable, but in this case there was only a single hedge fund selling its entire position: Millennium Management. One hedge fund selling its entire position doesn’t always imply a bearish intent. Theoretically a hedge fund may decide to sell a promising position in order to invest the proceeds in a more promising idea. However, we don’t think this is the case in this instance because only one of the 800+ hedge funds tracked by Insider Monkey identified it as a viable investment and initiated a position in the stock (that fund was PEAK6 Capital Management).

As you can see these stocks had an average of 6 hedge funds with bullish positions. Compared to these stocks Arlington Asset Investment is more popular among hedge funds. Considering that both hedge funds and insiders are fond of this stock right now, it may be a good idea to analyze it in detail and potentially include it in your portfolio.