Is Apartment Investment and Management Co. (AIV) A Good Stock To Buy?

The 700+ hedge funds and money managers tracked by Insider Monkey have already compiled and submitted their 13F filings for the fourth quarter, which unveil their equity positions as of December 31. We went through these filings, fixed typos and other more significant errors and identified the changes in hedge fund positions. Our extensive review of these public filings is finally over, so this article is set to reveal the smart money sentiment towards Apartment Investment and Management Co. (NYSE:AIV).

Is Apartment Investment and Management Co. (NYSE:AIV) a superb investment right now? Prominent investors are becoming hopeful. The number of long hedge fund bets moved up by 3 in recent months. Our calculations also showed that AIV isn’t among the 30 most popular stocks among hedge funds.

In today’s marketplace there are many indicators market participants employ to size up their holdings. Two of the most innovative indicators are hedge fund and insider trading indicators. We have shown that, historically, those who follow the best picks of the best hedge fund managers can outpace the broader indices by a healthy margin (see the details here).

How have hedgies been trading Apartment Investment and Management Co. (NYSE:AIV)?

Heading into the first quarter of 2019, a total of 21 of the hedge funds tracked by Insider Monkey held long positions in this stock, a change of 17% from one quarter earlier. The graph below displays the number of hedge funds with bullish position in AIV over the last 14 quarters. So, let’s review which hedge funds were among the top holders of the stock and which hedge funds were making big moves. 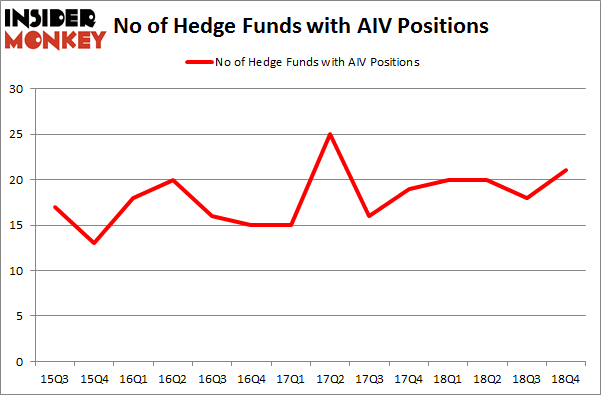 The largest stake in Apartment Investment and Management Co. (NYSE:AIV) was held by Renaissance Technologies, which reported holding $319.5 million worth of stock at the end of September. It was followed by Millennium Management with a $36.4 million position. Other investors bullish on the company included D E Shaw, Winton Capital Management, and Zimmer Partners.

As you can see these stocks had an average of 16.75 hedge funds with bullish positions and the average amount invested in these stocks was $466 million. That figure was $523 million in AIV’s case. SCANA Corporation (NYSE:SCG) is the most popular stock in this table. On the other hand Tallgrass Energy, LP (NYSE:TGE) is the least popular one with only 8 bullish hedge fund positions. Apartment Investment and Management Co. (NYSE:AIV) is not the most popular stock in this group but hedge fund interest is still above average. Our calculations showed that the top 15 most popular stocks among hedge funds returned 21.3% year-to-date through April 8th and outperformed the S&P 500 ETF (SPY) by more than 5 percentage points. Hedge funds were also right about betting on AIV, though not to the same extent, as the stock returned 16.4% and outperformed the market as well.