Is Antero Resources Corporation (AR) A Good Stock To Buy?

The 700+ hedge funds and famous money managers tracked by Insider Monkey have already compiled and submitted their 13F filings for the third quarter, which unveil their equity positions as of September 30. We went through these filings, fixed typos and other more significant errors and identified the changes in hedge fund portfolios. Our extensive review of these public filings is finally over, so this article is set to reveal the smart money sentiment towards Antero Resources Corporation (NYSE:AR).

Is Antero Resources Corporation (NYSE:AR) going to take off soon? The smart money is selling. The number of bullish hedge fund bets shrunk by 4 in recent months. Our calculations also showed that AR isn’t among the 30 most popular stocks among hedge funds (click for Q3 rankings and see the video below for Q2 rankings).

In the financial world there are tons of tools shareholders employ to size up publicly traded companies. A duo of the most useful tools are hedge fund and insider trading signals. Our researchers have shown that, historically, those who follow the best picks of the top investment managers can outclass the market by a significant margin (see the details here).

Unlike the largest US hedge funds that are convinced Dow will soar past 40,000 or the world’s most bearish hedge fund that’s more convinced than ever that a crash is coming, our long-short investment strategy doesn’t rely on bull or bear markets to deliver double digit returns. We only rely on the best performing hedge funds‘ buy/sell signals. Let’s take a look at the recent hedge fund action encompassing Antero Resources Corporation (NYSE:AR).

What have hedge funds been doing with Antero Resources Corporation (NYSE:AR)?

Heading into the fourth quarter of 2019, a total of 26 of the hedge funds tracked by Insider Monkey were long this stock, a change of -13% from the second quarter of 2019. By comparison, 20 hedge funds held shares or bullish call options in AR a year ago. With hedge funds’ positions undergoing their usual ebb and flow, there exists a select group of noteworthy hedge fund managers who were adding to their holdings meaningfully (or already accumulated large positions). 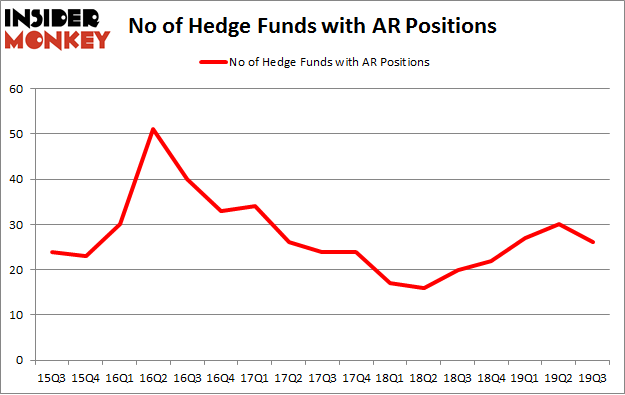 According to publicly available hedge fund and institutional investor holdings data compiled by Insider Monkey, Bob Peck and Andy Raab’s FPR Partners has the most valuable position in Antero Resources Corporation (NYSE:AR), worth close to $92.9 million, amounting to 2.1% of its total 13F portfolio. On FPR Partners’s heels is Baupost Group, led by Seth Klarman, holding a $63.7 million position; 0.7% of its 13F portfolio is allocated to the stock. Other members of the smart money with similar optimism encompass MacKenzie B. Davis and Kenneth L. Settles Jr’s SailingStone Capital Partners, Glenn Greenberg’s Brave Warrior Capital and Todd J. Kantor’s Encompass Capital Advisors. In terms of the portfolio weights assigned to each position SailingStone Capital Partners allocated the biggest weight to Antero Resources Corporation (NYSE:AR), around 15.72% of its portfolio. Mountain Lake Investment Management is also relatively very bullish on the stock, designating 2.37 percent of its 13F equity portfolio to AR.

Since Antero Resources Corporation (NYSE:AR) has experienced bearish sentiment from the smart money, it’s easy to see that there is a sect of fund managers that elected to cut their positions entirely in the third quarter. Interestingly, Matt Smith’s Deep Basin Capital cut the biggest stake of all the hedgies tracked by Insider Monkey, totaling an estimated $5.5 million in stock, and Ian Simm’s Impax Asset Management was right behind this move, as the fund cut about $3.3 million worth. These bearish behaviors are interesting, as total hedge fund interest fell by 4 funds in the third quarter.

As you can see these stocks had an average of 15.5 hedge funds with bullish positions and the average amount invested in these stocks was $106 million. That figure was $355 million in AR’s case. Century Communities, Inc (NYSE:CCS) is the most popular stock in this table. On the other hand Intrexon Corporation (NYSE:XON) is the least popular one with only 12 bullish hedge fund positions. Compared to these stocks Antero Resources Corporation (NYSE:AR) is more popular among hedge funds. Our calculations showed that top 20 most popular stocks among hedge funds returned 37.4% in 2019 through the end of November and outperformed the S&P 500 ETF (SPY) by 9.9 percentage points. Unfortunately AR wasn’t nearly as popular as these 20 stocks and hedge funds that were betting on AR were disappointed as the stock returned -34.1% during the first two months of the fourth quarter and underperformed the market. If you are interested in investing in large cap stocks with huge upside potential, you should check out the top 20 most popular stocks among hedge funds as 70 percent of these stocks already outperformed the market in Q4.