We are still in an overall bull market and many stocks that smart money investors were piling into surged through October 17th. Among them, Facebook and Microsoft ranked among the top 3 picks and these stocks gained 45% and 39% respectively. Hedge funds’ top 3 stock picks returned 34.4% this year and beat the S&P 500 ETFs by 13 percentage points. Investing in index funds guarantees you average returns, not superior returns. We are looking to generate superior returns for our readers. That’s why we believe it isn’t a waste of time to check out hedge fund sentiment before you invest in a stock like AMN Healthcare Services Inc (NYSE:AMN).

AMN Healthcare Services Inc (NYSE:AMN) investors should pay attention to an increase in enthusiasm from smart money lately. AMN was in 14 hedge funds’ portfolios at the end of the second quarter of 2019. There were 11 hedge funds in our database with AMN positions at the end of the previous quarter. Our calculations also showed that AMN isn’t among the 30 most popular stocks among hedge funds (view the video below).

Today there are a multitude of methods stock traders can use to size up publicly traded companies. A pair of the most underrated methods are hedge fund and insider trading indicators. Our experts have shown that, historically, those who follow the best picks of the top hedge fund managers can outperform the market by a solid amount (see the details here).

At Q2’s end, a total of 14 of the hedge funds tracked by Insider Monkey were long this stock, a change of 27% from the previous quarter. Below, you can check out the change in hedge fund sentiment towards AMN over the last 16 quarters. With hedge funds’ capital changing hands, there exists a few key hedge fund managers who were boosting their stakes considerably (or already accumulated large positions). 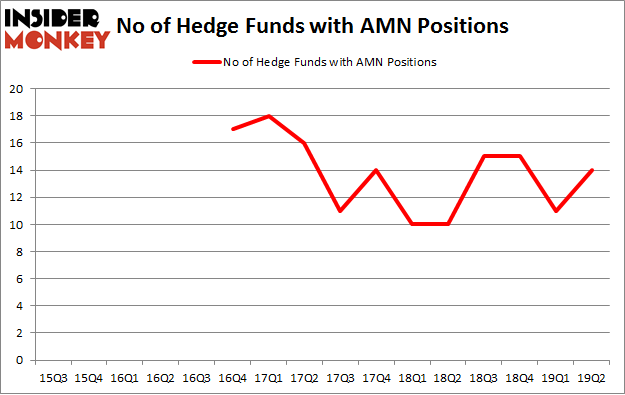 The largest stake in AMN Healthcare Services Inc (NYSE:AMN) was held by SG Capital Management, which reported holding $50.8 million worth of stock at the end of March. It was followed by Point72 Asset Management with a $17.4 million position. Other investors bullish on the company included GLG Partners, Millennium Management, and Royce & Associates.

Consequently, some big names were leading the bulls’ herd. SG Capital Management, managed by Ken Grossman and Glen Schneider, assembled the most valuable position in AMN Healthcare Services Inc (NYSE:AMN). SG Capital Management had $50.8 million invested in the company at the end of the quarter. George Zweig, Shane Haas and Ravi Chander’s Signition LP also made a $0.9 million investment in the stock during the quarter. The following funds were also among the new AMN investors: Alec Litowitz and Ross Laser’s Magnetar Capital, David Harding’s Winton Capital Management, and Dmitry Balyasny’s Balyasny Asset Management.

As you can see these stocks had an average of 17 hedge funds with bullish positions and the average amount invested in these stocks was $129 million. That figure was $110 million in AMN’s case. United States Steel Corporation (NYSE:X) is the most popular stock in this table. On the other hand Piedmont Office Realty Trust, Inc. (NYSE:PDM) is the least popular one with only 12 bullish hedge fund positions. AMN Healthcare Services Inc (NYSE:AMN) is not the least popular stock in this group but hedge fund interest is still below average. Our calculations showed that top 20 most popular stocks among hedge funds returned 24.4% in 2019 through September 30th and outperformed the S&P 500 ETF (SPY) by 4 percentage points. A small number of hedge funds were also right about betting on AMN as the stock returned 6.1% during the same time frame and outperformed the market by an even larger margin.