Hedge fund managers like David Einhorn, Bill Ackman, or Carl Icahn became billionaires through reaping large profits for their investors, which is why piggybacking their stock picks may provide us with significant returns as well. Many hedge funds, like Paul Singer’s Elliott Management, are pretty secretive, but we can still get some insights by analyzing their quarterly 13F filings. One of the most fertile grounds for large abnormal returns is hedge funds’ most popular small-cap picks, which are not so widely followed and often trade at a discount to their intrinsic value. In this article we will check out hedge fund activity in another small-cap stock: AMETEK, Inc. (NYSE:AME).

Is AMETEK, Inc. (NYSE:AME) going to take off soon? The smart money is becoming more confident. The number of long hedge fund bets rose by 2 lately. Our calculations also showed that AME isn’t among the 30 most popular stocks among hedge funds.

Unlike some fund managers who are betting on Dow reaching 40000 in a year, our long-short investment strategy doesn’t rely on bull markets to deliver double digit returns. We only rely on hedge fund buy/sell signals. We’re going to take a glance at the new hedge fund action encompassing AMETEK, Inc. (NYSE:AME).

At Q2’s end, a total of 31 of the hedge funds tracked by Insider Monkey were long this stock, a change of 7% from the first quarter of 2019. The graph below displays the number of hedge funds with bullish position in AME over the last 16 quarters. With hedgies’ capital changing hands, there exists a few noteworthy hedge fund managers who were increasing their stakes considerably (or already accumulated large positions). 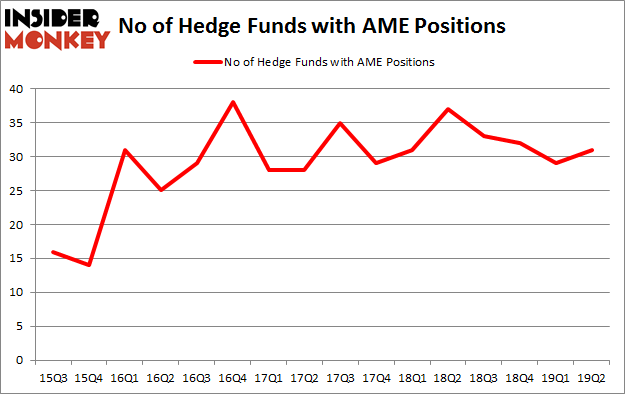 The largest stake in AMETEK, Inc. (NYSE:AME) was held by Citadel Investment Group, which reported holding $382.6 million worth of stock at the end of March. It was followed by GAMCO Investors with a $128.2 million position. Other investors bullish on the company included Millennium Management, Giverny Capital, and Scopus Asset Management.

As one would reasonably expect, key hedge funds were breaking ground themselves. Renaissance Technologies assembled the biggest position in AMETEK, Inc. (NYSE:AME). Renaissance Technologies had $34.2 million invested in the company at the end of the quarter. Clint Carlson’s Carlson Capital also made a $13.6 million investment in the stock during the quarter. The other funds with new positions in the stock are Brad Dunkley and Blair Levinsky’s Waratah Capital Advisors, James Dondero’s Highland Capital Management, and Perella Weinberg Partners.

Let’s now take a look at hedge fund activity in other stocks – not necessarily in the same industry as AMETEK, Inc. (NYSE:AME) but similarly valued. We will take a look at MSCI Inc (NYSE:MSCI), Cheniere Energy Partners LP (NYSE:CQP), Entergy Corporation (NYSE:ETR), and Aptiv PLC (NYSE:APTV). This group of stocks’ market values are closest to AME’s market value.

As you can see these stocks had an average of 24.75 hedge funds with bullish positions and the average amount invested in these stocks was $798 million. That figure was $1065 million in AME’s case. MSCI Inc (NYSE:MSCI) is the most popular stock in this table. On the other hand Cheniere Energy Partners LP (NYSE:CQP) is the least popular one with only 7 bullish hedge fund positions. AMETEK, Inc. (NYSE:AME) is not the most popular stock in this group but hedge fund interest is still above average. This is a slightly positive signal but we’d rather spend our time researching stocks that hedge funds are piling on. Our calculations showed that top 20 most popular stocks among hedge funds returned 24.4% in 2019 through September 30th and outperformed the S&P 500 ETF (SPY) by 4 percentage points. Unfortunately AME wasn’t nearly as popular as these 20 stocks and hedge funds that were betting on AME were disappointed as the stock returned 1.2% during the third quarter and underperformed the market. If you are interested in investing in large cap stocks with huge upside potential, you should check out the top 20 most popular stocks (see the video below) among hedge funds as many of these stocks already outperformed the market so far this year.