AMETEK, Inc. (NYSE:AME) was in 32 hedge funds’ portfolios at the end of the fourth quarter of 2018. AME has seen a decrease in hedge fund interest recently. There were 33 hedge funds in our database with AME positions at the end of the previous quarter. Our calculations also showed that AME isn’t among the 30 most popular stocks among hedge funds.

We’re going to take a peek at the latest hedge fund action regarding AMETEK, Inc. (NYSE:AME).

What does the smart money think about AMETEK, Inc. (NYSE:AME)? 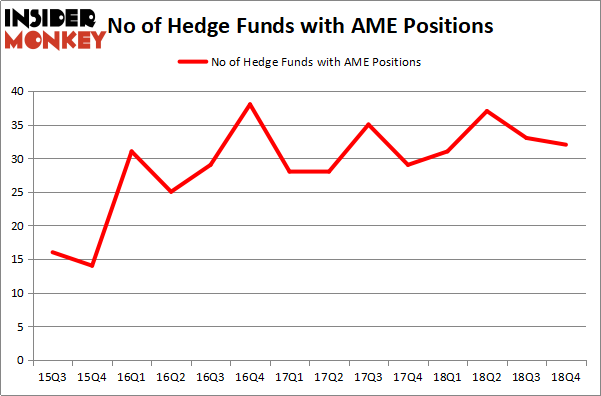 The largest stake in AMETEK, Inc. (NYSE:AME) was held by Citadel Investment Group, which reported holding $248.4 million worth of stock at the end of September. It was followed by GAMCO Investors with a $101.2 million position. Other investors bullish on the company included Select Equity Group, Millennium Management, and Point72 Asset Management.

Due to the fact that AMETEK, Inc. (NYSE:AME) has witnessed falling interest from the entirety of the hedge funds we track, it’s easy to see that there exists a select few hedgies who sold off their full holdings heading into Q3. At the top of the heap, Mark Moore’s ThornTree Capital Partners cut the largest investment of all the hedgies followed by Insider Monkey, worth about $45.9 million in stock. Clint Carlson’s fund, Carlson Capital, also said goodbye to its stock, about $32.8 million worth. These bearish behaviors are interesting, as aggregate hedge fund interest was cut by 1 funds heading into Q3.

As you can see these stocks had an average of 25.75 hedge funds with bullish positions and the average amount invested in these stocks was $1100 million. That figure was $886 million in AME’s case. Ball Corporation (NYSE:BLL) is the most popular stock in this table. On the other hand Avangrid, Inc. (NYSE:AGR) is the least popular one with only 13 bullish hedge fund positions. AMETEK, Inc. (NYSE:AME) is not the most popular stock in this group but hedge fund interest is still above average. Our calculations showed that top 15 most popular stocks among hedge funds returned 19.7% through March 15th and outperformed the S&P 500 ETF (SPY) by 6.6 percentage points. Hedge funds were also right about betting on AME as the stock returned 19.6% and outperformed the market as well.