America’s Car-Mart, Inc. (NASDAQ:CRMT) was in 16 hedge funds’ portfolios at the end of the third quarter of 2018. CRMT has seen an increase in support from the world’s most elite money managers lately. There were 13 hedge funds in our database with CRMT positions at the end of the previous quarter. Our calculations also showed that CRMT isn’t among the 30 most popular stocks among hedge funds.

Today there are many metrics stock traders put to use to value publicly traded companies. A couple of the less known metrics are hedge fund and insider trading interest. Our experts have shown that, historically, those who follow the top picks of the elite hedge fund managers can outclass their index-focused peers by a very impressive margin (see the details here).

What have hedge funds been doing with America’s Car-Mart, Inc. (NASDAQ:CRMT)? 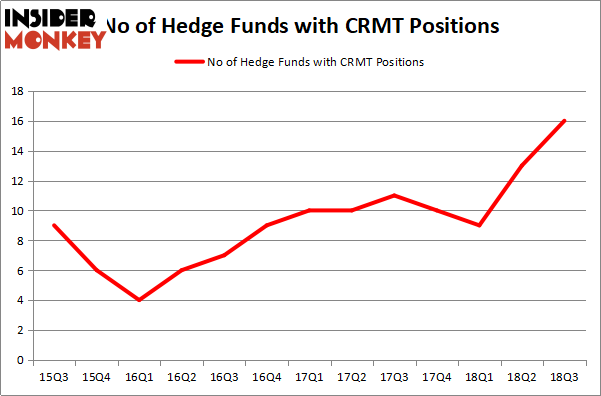 Among these funds, Magnolia Capital Fund held the most valuable stake in America’s Car-Mart, Inc. (NASDAQ:CRMT), which was worth $34.4 million at the end of the third quarter. On the second spot was Royce & Associates which amassed $18.1 million worth of shares. Moreover, SG Capital Management, Renaissance Technologies, and Millennium Management were also bullish on America’s Car-Mart, Inc. (NASDAQ:CRMT), allocating a large percentage of their portfolios to this stock.

Now, specific money managers have been driving this bullishness. Marshall Wace LLP, managed by Paul Marshall and Ian Wace, assembled the biggest position in America’s Car-Mart, Inc. (NASDAQ:CRMT). Marshall Wace LLP had $2.2 million invested in the company at the end of the quarter. Roger Ibbotson’s Zebra Capital Management also initiated a $0.3 million position during the quarter. The only other fund with a brand new CRMT position is Jeffrey Talpins’s Element Capital Management.

As you can see these stocks had an average of 12 hedge funds with bullish positions and the average amount invested in these stocks was $90 million. That figure was $89 million in CRMT’s case. 0 is the most popular stock in this table. On the other hand Global Indemnity Limited (NASDAQ:GBLI) is the least popular one with only 7 bullish hedge fund positions. America’s Car-Mart, Inc. (NASDAQ:CRMT) is not the most popular stock in this group but hedge fund interest is still above average. This is a slightly positive signal but we’d rather spend our time researching stocks that hedge funds are piling on. In this regard ARVN might be a better candidate to consider a long position.