Is Ameresco Inc (AMRC) A Good Stock To Buy?

Ameresco Inc (NYSE:AMRC) was in 7 hedge funds’ portfolios at the end of the fourth quarter of 2018. AMRC has seen a decrease in support from the world’s most elite money managers of late. There were 10 hedge funds in our database with AMRC positions at the end of the previous quarter. Our calculations also showed that AMRC isn’t among the 30 most popular stocks among hedge funds.

In today’s marketplace there are dozens of metrics stock market investors have at their disposal to evaluate publicly traded companies. Two of the less utilized metrics are hedge fund and insider trading sentiment. Our experts have shown that, historically, those who follow the best picks of the best fund managers can trounce their index-focused peers by a solid amount (see the details here).

What have hedge funds been doing with Ameresco Inc (NYSE:AMRC)?

Heading into the first quarter of 2019, a total of 7 of the hedge funds tracked by Insider Monkey were long this stock, a change of -30% from the second quarter of 2018. The graph below displays the number of hedge funds with bullish position in AMRC over the last 14 quarters. With the smart money’s capital changing hands, there exists a few key hedge fund managers who were increasing their stakes meaningfully (or already accumulated large positions). 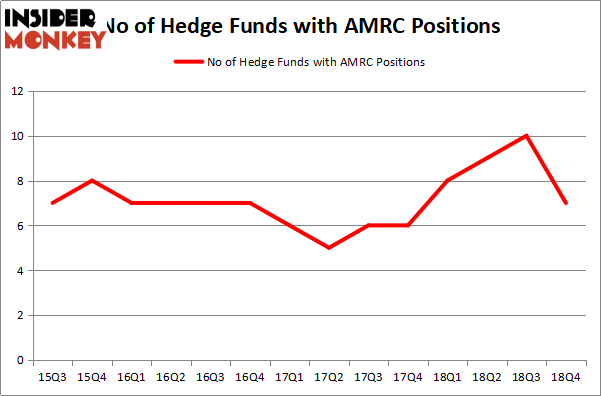 According to publicly available hedge fund and institutional investor holdings data compiled by Insider Monkey, Royce & Associates, managed by Chuck Royce, holds the number one position in Ameresco Inc (NYSE:AMRC). Royce & Associates has a $8 million position in the stock, comprising 0.1% of its 13F portfolio. On Royce & Associates’s heels is Bandera Partners, managed by Gregory Bylinsky and Jefferson Gramm, which holds a $5.6 million position; the fund has 4.1% of its 13F portfolio invested in the stock. Some other peers that are bullish include Richard Driehaus’s Driehaus Capital, Jim Simons’s Renaissance Technologies and John Overdeck and David Siegel’s Two Sigma Advisors.

Due to the fact that Ameresco Inc (NYSE:AMRC) has experienced a decline in interest from the entirety of the hedge funds we track, it’s safe to say that there lies a certain “tier” of fund managers that elected to cut their entire stakes last quarter. Intriguingly, D. E. Shaw’s D E Shaw said goodbye to the biggest position of all the hedgies followed by Insider Monkey, comprising an estimated $0.8 million in stock, and Ken Griffin’s Citadel Investment Group was right behind this move, as the fund dumped about $0.3 million worth. These bearish behaviors are important to note, as total hedge fund interest dropped by 3 funds last quarter.

As you can see these stocks had an average of 12.75 hedge funds with bullish positions and the average amount invested in these stocks was $74 million. That figure was $23 million in AMRC’s case. Noble Corporation plc (NYSE:NE) is the most popular stock in this table. On the other hand Weidai Ltd. (NYSE:WEI) is the least popular one with only 1 bullish hedge fund positions. Ameresco Inc (NYSE:AMRC) is not the least popular stock in this group but hedge fund interest is still below average. This is a slightly negative signal and we’d rather spend our time researching stocks that hedge funds are piling on. Our calculations showed that top 15 most popular stocks) among hedge funds returned 24.2% through April 22nd and outperformed the S&P 500 ETF (SPY) by more than 7 percentage points. Unfortunately AMRC wasn’t nearly as popular as these 15 stock (hedge fund sentiment was quite bearish); AMRC investors were disappointed as the stock returned 15.5% and underperformed the market. If you are interested in investing in large cap stocks with huge upside potential, you should check out the top 15 most popular stocks) among hedge funds as 13 of these stocks already outperformed the market this year.