Is Ameren Corporation (AEE) A Good Stock To Buy?

Is Ameren Corporation (NYSE:AEE) a bargain? Hedge funds are in a bearish mood. The number of bullish hedge fund positions were trimmed by 2 in recent months. Our calculations also showed that AEE isn’t among the 30 most popular stocks among hedge funds.

At the end of the first quarter, a total of 21 of the hedge funds tracked by Insider Monkey held long positions in this stock, a change of -9% from one quarter earlier. On the other hand, there were a total of 21 hedge funds with a bullish position in AEE a year ago. With the smart money’s positions undergoing their usual ebb and flow, there exists a few noteworthy hedge fund managers who were upping their stakes substantially (or already accumulated large positions). 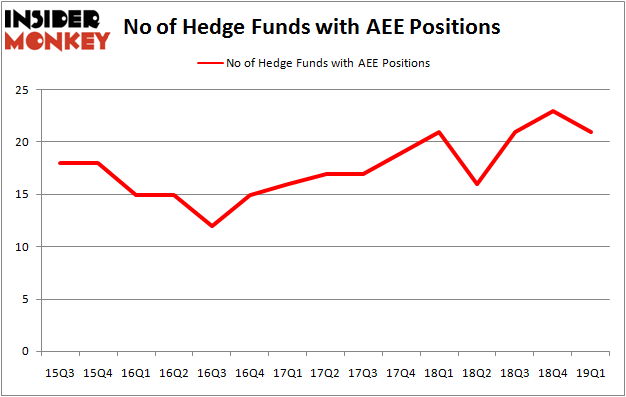 Due to the fact that Ameren Corporation (NYSE:AEE) has witnessed falling interest from the aggregate hedge fund industry, we can see that there exists a select few money managers who were dropping their full holdings heading into Q3. Interestingly, Andrew Feldstein and Stephen Siderow’s Blue Mountain Capital cut the largest investment of the 700 funds tracked by Insider Monkey, totaling close to $4.5 million in stock. Paul Tudor Jones’s fund, Tudor Investment Corp, also cut its stock, about $2.3 million worth. These transactions are important to note, as aggregate hedge fund interest dropped by 2 funds heading into Q3.

As you can see these stocks had an average of 29.5 hedge funds with bullish positions and the average amount invested in these stocks was $1387 million. That figure was $740 million in AEE’s case. The Hartford Financial Services Group Inc (NYSE:HIG) is the most popular stock in this table. On the other hand Mettler-Toledo International Inc. (NYSE:MTD) is the least popular one with only 18 bullish hedge fund positions. Ameren Corporation (NYSE:AEE) is not the least popular stock in this group but hedge fund interest is still below average. Our calculations showed that top 20 most popular stocks among hedge funds returned 1.9% in Q2 through May 30th and outperformed the S&P 500 ETF (SPY) by more than 3 percentage points. A small number of hedge funds were also right about betting on AEE, though not to the same extent, as the stock returned -0.9% during the same time frame and outperformed the market as well.