Before we spend countless hours researching a company, we’d like to analyze what insiders, hedge funds and billionaire investors think of the stock first. We would like to do so because our research has shown that the elite investors’ consensus returns have been exceptional. In the following paragraphs, we find out what the billionaire investors and hedge funds think of AMC Entertainment Holdings Inc (NYSE:AMC).

AMC Entertainment Holdings Inc (NYSE:AMC) shares haven’t seen a lot of action during the third quarter. Overall, hedge fund sentiment was unchanged. The stock was in 21 hedge funds’ portfolios at the end of December. The level and the change in hedge fund popularity aren’t the only variables you need to analyze to decipher hedge funds’ perspectives. A stock may witness a boost in popularity but it may still be less popular than similarly priced stocks. That’s why at the end of this article we will examine companies such as OneSmart International Education Group Limited (NYSE:ONE), Rubius Therapeutics, Inc. (NASDAQ:RUBY), and Global Net Lease, Inc. (NYSE:GNL) to gather more data points.

At the moment there are tons of indicators shareholders put to use to assess their stock investments. A pair of the most underrated indicators are hedge fund and insider trading sentiment. Our researchers have shown that, historically, those who follow the top picks of the top investment managers can outpace the market by a healthy margin (see the details here).

At Q4’s end, a total of 21 of the hedge funds tracked by Insider Monkey were long this stock, a change of 0% from the second quarter of 2018. By comparison, 17 hedge funds held shares or bullish call options in AMC a year ago. With hedge funds’ capital changing hands, there exists a few noteworthy hedge fund managers who were increasing their stakes significantly (or already accumulated large positions). 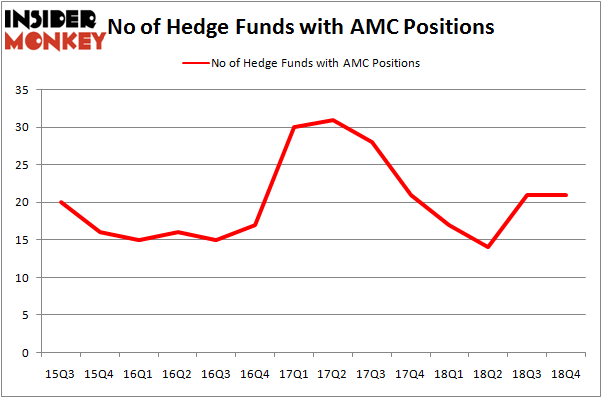 Among these funds, Renaissance Technologies held the most valuable stake in AMC Entertainment Holdings Inc (NYSE:AMC), which was worth $22.4 million at the end of the fourth quarter. On the second spot was Baupost Group which amassed $17.9 million worth of shares. Moreover, Maverick Capital, Luxor Capital Group, and Greenvale Capital were also bullish on AMC Entertainment Holdings Inc (NYSE:AMC), allocating a large percentage of their portfolios to this stock.

Since AMC Entertainment Holdings Inc (NYSE:AMC) has faced a decline in interest from the smart money, we can see that there lies a certain “tier” of money managers that decided to sell off their entire stakes last quarter. Intriguingly, Jack Ripsteen’s Potrero Capital Research dumped the largest position of the “upper crust” of funds watched by Insider Monkey, worth about $5.8 million in stock. Joel Greenblatt’s fund, Gotham Asset Management, also dropped its stock, about $4.6 million worth. These transactions are intriguing to say the least, as total hedge fund interest stayed the same (this is a bearish signal in our experience).

As you can see these stocks had an average of 11 hedge funds with bullish positions and the average amount invested in these stocks was $109 million. That figure was $89 million in AMC’s case. The Liberty Braves Group (NASDAQ:BATRK) is the most popular stock in this table. On the other hand Rubius Therapeutics, Inc. (NASDAQ:RUBY) is the least popular one with only 3 bullish hedge fund positions. AMC Entertainment Holdings Inc (NYSE:AMC) is not the most popular stock in this group but hedge fund interest is still above average. Our calculations showed that top 15 most popular stocks) among hedge funds returned 24.2% through April 22nd and outperformed the S&P 500 ETF (SPY) by more than 7 percentage points. Hedge funds were also right about betting on AMC as the stock returned 26% and outperformed the market by an even larger margin. Hedge funds were rewarded for their relative bullishness.