Is Altus Midstream Company (ALTM) A Good Stock To Buy ?

Is Altus Midstream Company (NASDAQ:ALTM) a good place to invest some of your money right now? We can gain invaluable insight to help us answer that question by studying the investment trends of top investors, who employ world-class Ivy League graduates, who are given immense resources and industry contacts to put their financial expertise to work. The top picks of these firms have historically outperformed the market when we account for known risk factors, making them very valuable investment ideas.

Is Altus Midstream Company (NASDAQ:ALTM) a buy right now? Prominent investors are taking a pessimistic view. The number of long hedge fund positions were trimmed by 11 lately. Our calculations also showed that altm isn’t among the 30 most popular stocks among hedge funds.

What have hedge funds been doing with Altus Midstream Company (NASDAQ:ALTM)?

Heading into the first quarter of 2019, a total of 5 of the hedge funds tracked by Insider Monkey were bullish on this stock, a change of -69% from one quarter earlier. By comparison, 17 hedge funds held shares or bullish call options in ALTM a year ago. With hedge funds’ capital changing hands, there exists a select group of noteworthy hedge fund managers who were boosting their stakes substantially (or already accumulated large positions). 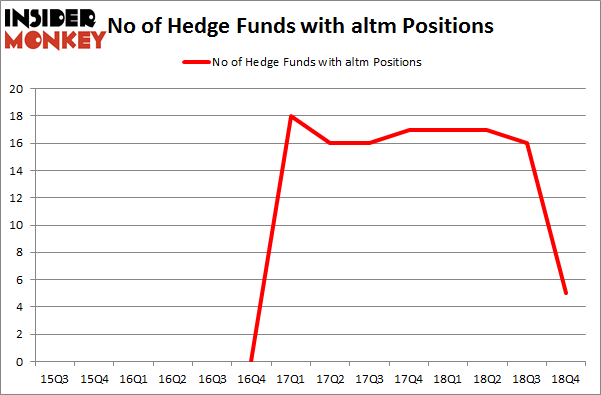 More specifically, Anchorage Advisors was the largest shareholder of Altus Midstream Company (NASDAQ:ALTM), with a stake worth $29 million reported as of the end of September. Trailing Anchorage Advisors was Magnetar Capital, which amassed a stake valued at $7.7 million. Moore Global Investments, Millennium Management, and Centiva Capital were also very fond of the stock, giving the stock large weights in their portfolios.

We view hedge fund activity in the stock unfavorable, but in this case there was only a single hedge fund selling its entire position: 999. One hedge fund selling its entire position doesn’t always imply a bearish intent. Theoretically a hedge fund may decide to sell a promising position in order to invest the proceeds in a more promising idea. However, we don’t think this is the case in this case because only one of the 800+ hedge funds tracked by Insider Monkey identified as a viable investment and initiated a position in the stock (that fund was Anchorage Advisors).

As you can see these stocks had an average of 14.5 hedge funds with bullish positions and the average amount invested in these stocks was $233 million. That figure was $42 million in ALTM’s case. Aspen Insurance Holdings Limited (NYSE:AHL) is the most popular stock in this table. On the other hand Noah Holdings Limited (NYSE:NOAH) is the least popular one with only 11 bullish hedge fund positions. Compared to these stocks Altus Midstream Company (NASDAQ:ALTM) is even less popular than NOAH. Hedge funds dodged a bullet by taking a bearish stance towards ALTM. Our calculations showed that the top 15 most popular hedge fund stocks returned 24.2% through April 22nd and outperformed the S&P 500 ETF (SPY) by more than 7 percentage points. Unfortunately ALTM wasn’t nearly as popular as these 15 stock (hedge fund sentiment was very bearish); ALTM investors were disappointed as the stock returned -30% and underperformed the market. If you are interested in investing in large cap stocks with huge upside potential, you should check out the top 15 most popular stocks) among hedge funds as 13 of these stocks already outperformed the market this year.