While the market driven by short-term sentiment influenced by uncertainty regarding the future of the interest rate environment in the US, declining oil prices and the trade war with China, many smart money investors kept their optimism regarding the current bull run in the fourth quarter, while still hedging many of their long positions. However, as we know, big investors usually buy stocks with strong fundamentals, which is why we believe we can profit from imitating them. In this article, we are going to take a look at the smart money sentiment surrounding AllianceBernstein Holding LP (NYSE:AB).

AllianceBernstein Holding LP (NYSE:AB) was in 7 hedge funds’ portfolios at the end of December. AB shareholders have witnessed an increase in activity from the world’s largest hedge funds recently. There were 6 hedge funds in our database with AB positions at the end of the previous quarter. Our calculations also showed that ab isn’t among the 30 most popular stocks among hedge funds. 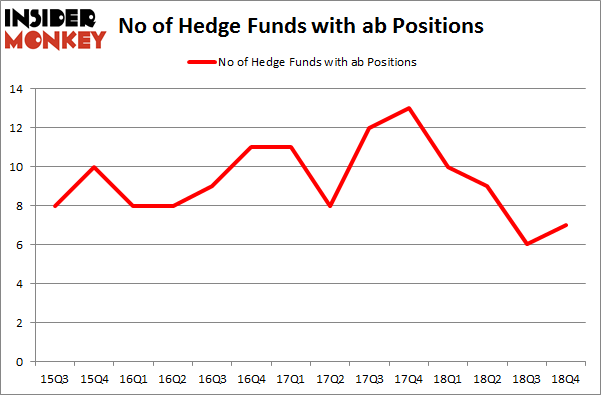 According to Insider Monkey’s hedge fund database, Chuck Royce’s Royce & Associates has the number one position in AllianceBernstein Holding LP (NYSE:AB), worth close to $10.6 million, accounting for 0.1% of its total 13F portfolio. The second most bullish fund manager is GAMCO Investors, led by Mario Gabelli, holding a $3.3 million position; less than 0.1%% of its 13F portfolio is allocated to the stock. Some other members of the smart money that hold long positions consist of Robert B. Gillam’s McKinley Capital Management, David M. Knott’s Dorset Management and Matthew Hulsizer’s PEAK6 Capital Management.

As aggregate interest increased, specific money managers were breaking ground themselves. Chiron Investment Management, managed by Ryan Caldwell, assembled the most outsized position in AllianceBernstein Holding LP (NYSE:AB). Chiron Investment Management had $0.2 million invested in the company at the end of the quarter. Matthew Hulsizer’s PEAK6 Capital Management also made a $0.1 million investment in the stock during the quarter.

As you can see these stocks had an average of 13.5 hedge funds with bullish positions and the average amount invested in these stocks was $228 million. That figure was $18 million in AB’s case. LiveRamp Holdings, Inc. (NYSE:RAMP) is the most popular stock in this table. On the other hand Ardagh Group S.A. (NYSE:ARD) is the least popular one with only 10 bullish hedge fund positions. Compared to these stocks AllianceBernstein Holding LP (NYSE:AB) is even less popular than ARD. Hedge funds dodged a bullet by taking a bearish stance towards AB. Our calculations showed that the top 15 most popular hedge fund stocks returned 24.2% through April 22nd and outperformed the S&P 500 ETF (SPY) by more than 7 percentage points. Unfortunately AB wasn’t nearly as popular as these 15 stock (hedge fund sentiment was very bearish); AB investors were disappointed as the stock returned 11.2% and underperformed the market. If you are interested in investing in large cap stocks with huge upside potential, you should check out the top 15 most popular stocks) among hedge funds as 13 of these stocks already outperformed the market this year.