Is Allergan plc (AGN) A Good Stock To Buy?

Most investors tend to think that hedge funds and other asset managers are worthless, as they cannot beat even simple index fund portfolios. In fact, most people expect hedge funds to compete with and outperform the bull market that we have witnessed over the past few years. However, hedge funds are generally partially hedged and aim at delivering attractive risk-adjusted returns rather than following the ups and downs of equity markets hoping that they will outperform the broader market. Our research shows that hedge funds do have great stock picking skills, so let’s take a glance at the smart money sentiment towards Allergan plc (NYSE:AGN).

Is Allergan plc (NYSE:AGN) undervalued? The best stock pickers are in an optimistic mood. The number of bullish hedge fund bets went up by 4 in recent months. Our calculations showed that AGN isn’t among the 30 most popular stocks among hedge funds, less than three years after it was the #1 most popular stock. It did still rank highly among billionaires however, ranking 21st among the 30 Stocks Billionaires Are Crazy About: Insider Monkey Billionaire Stock Index, being owned by the likes of Seth Klarman and Brian Higgins.

At Q3’s end, a total of 62 of the hedge funds tracked by Insider Monkey were bullish on this stock, a 7% uptick from the second quarter of 2018. Below, you can check out the change in hedge fund sentiment towards AGN over the last 13 quarters. With hedgies’ sentiment swirling, there exists a few noteworthy hedge fund managers who were adding to their stakes substantially (or already accumulated large positions). 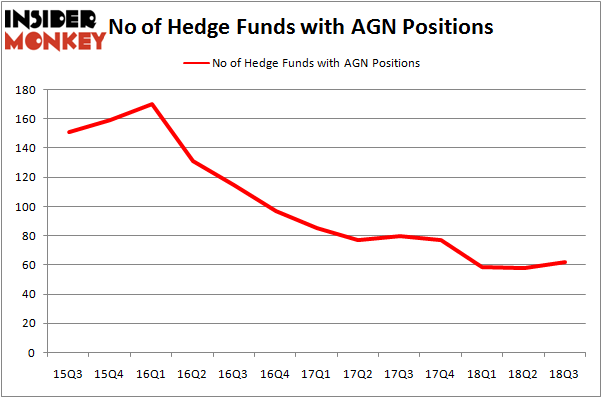 The largest stake in Allergan plc (NYSE:AGN) was held by Baupost Group, which reported holding $942.9 million worth of stock at the end of September. It was followed by Southeastern Asset Management with a $437.2 million position. Other investors bullish on the company included Appaloosa Management LP, Glenview Capital, and Paulson & Co.

As you can see these stocks had an average of 36 hedge funds with bullish positions and the average amount invested in these stocks was $3.0 billion. That figure was $5.15 billion in AGN’s case. CSX Corporation (NYSE:CSX) is the most popular stock in this table. On the other hand China Life Insurance Company Ltd. (NYSE:LFC) is the least popular one with only 10 bullish hedge fund positions. Compared to these stocks Allergan plc (NYSE:AGN) is more popular among hedge funds. Considering that hedge funds are fond of this stock in relation to its market cap peers, it may be a good idea to analyze it in detail and potentially include it in your portfolio.