Is Allergan plc (AGN) A Good Stock To Buy ?

Many investors, including Paul Tudor Jones or Stan Druckenmiller, have been saying before the Q4 market crash that the stock market is overvalued due to a low interest rate environment that leads to companies swapping their equity for debt and focusing mostly on short-term performance such as beating the quarterly earnings estimates. In the first quarter, most investors recovered all of their Q4 losses as sentiment shifted and optimism dominated the US China trade negotiations. Nevertheless, many of the stocks that delivered strong returns in the first quarter still sport strong fundamentals and their gains were more related to the general market sentiment rather than their individual performance and hedge funds kept their bullish stance. In this article we will find out how hedge fund sentiment to Allergan plc (NYSE:AGN) changed recently.

Allergan plc (NYSE:AGN) was in 53 hedge funds’ portfolios at the end of the first quarter of 2019. AGN shareholders have witnessed a decrease in hedge fund sentiment in recent months. There were 61 hedge funds in our database with AGN holdings at the end of the previous quarter. Our calculations also showed that AGN isn’t among the 30 most popular stocks among hedge funds.

What does the smart money think about Allergan plc (NYSE:AGN)? 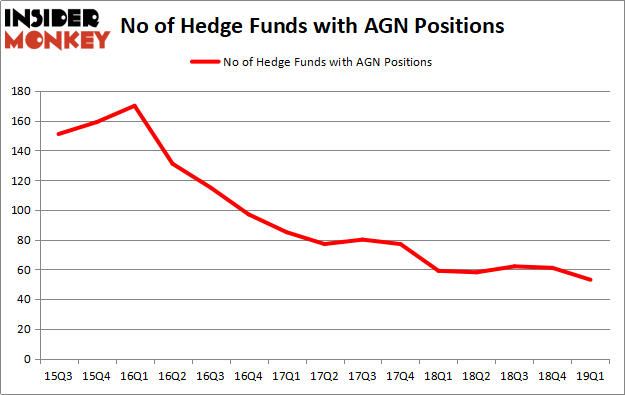 More specifically, Baupost Group was the largest shareholder of Allergan plc (NYSE:AGN), with a stake worth $698.3 million reported as of the end of March. Trailing Baupost Group was Appaloosa Management LP, which amassed a stake valued at $458.8 million. King Street Capital, Renaissance Technologies, and Southeastern Asset Management were also very fond of the stock, giving the stock large weights in their portfolios.

Because Allergan plc (NYSE:AGN) has faced a decline in interest from hedge fund managers, logic holds that there exists a select few hedgies who sold off their entire stakes last quarter. Interestingly, David Cohen and Harold Levy’s Iridian Asset Management cut the largest investment of the 700 funds followed by Insider Monkey, worth about $168.3 million in call options, and Stephen DuBois’s Camber Capital Management was right behind this move, as the fund dumped about $133.7 million worth. These bearish behaviors are intriguing to say the least, as aggregate hedge fund interest dropped by 8 funds last quarter.