Is Alamo Group, Inc. (ALG) A Good Stock To Buy?

The 700+ hedge funds and famous money managers tracked by Insider Monkey have already compiled and submitted their 13F filings for the second quarter, which unveil their equity positions as of June 28. We went through these filings, fixed typos and other more significant errors and identified the changes in hedge fund portfolios. Our extensive review of these public filings is finally over, so this article is set to reveal the smart money sentiment towards Alamo Group, Inc. (NYSE:ALG).

Alamo Group, Inc. (NYSE:ALG) has seen a decrease in hedge fund sentiment of late. ALG was in 7 hedge funds’ portfolios at the end of June. There were 10 hedge funds in our database with ALG holdings at the end of the previous quarter. Our calculations also showed that ALG isn’t among the 30 most popular stocks among hedge funds (see the video below).

In the 21st century investor’s toolkit there are a multitude of methods stock market investors employ to size up publicly traded companies. Two of the most innovative methods are hedge fund and insider trading indicators. Our researchers have shown that, historically, those who follow the best picks of the best fund managers can outperform their index-focused peers by a healthy margin (see the details here). 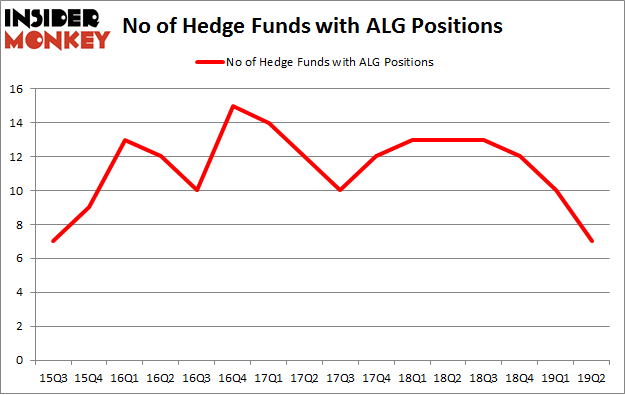 According to publicly available hedge fund and institutional investor holdings data compiled by Insider Monkey, James A. Star’s Longview Asset Management has the most valuable position in Alamo Group, Inc. (NYSE:ALG), worth close to $169.9 million, accounting for 2.7% of its total 13F portfolio. Sitting at the No. 2 spot is Royce & Associates, managed by Chuck Royce, which holds a $6 million position; 0.1% of its 13F portfolio is allocated to the stock. Other members of the smart money that are bullish consist of Martin Whitman’s Third Avenue Management, Ken Griffin’s Citadel Investment Group and Renaissance Technologies.

Since Alamo Group, Inc. (NYSE:ALG) has experienced falling interest from the entirety of the hedge funds we track, logic holds that there was a specific group of fund managers that decided to sell off their positions entirely last quarter. It’s worth mentioning that Peter Rathjens, Bruce Clarke and John Campbell’s Arrowstreet Capital dumped the biggest position of all the hedgies tracked by Insider Monkey, comprising an estimated $2.2 million in stock. Cliff Asness’s fund, AQR Capital Management, also said goodbye to its stock, about $1 million worth. These moves are intriguing to say the least, as total hedge fund interest dropped by 3 funds last quarter.

As you can see these stocks had an average of 11 hedge funds with bullish positions and the average amount invested in these stocks was $47 million. That figure was $186 million in ALG’s case. Perficient, Inc. (NASDAQ:PRFT) is the most popular stock in this table. On the other hand Opera Limited (NASDAQ:OPRA) is the least popular one with only 6 bullish hedge fund positions. Alamo Group, Inc. (NYSE:ALG) is not the least popular stock in this group but hedge fund interest is still below average. Our calculations showed that top 20 most popular stocks among hedge funds returned 24.4% in 2019 through September 30th and outperformed the S&P 500 ETF (SPY) by 4 percentage points. A small number of hedge funds were also right about betting on ALG as the stock returned 17.9% during the same time frame and outperformed the market by an even larger margin.