Akorn, Inc. (NASDAQ:AKRX) shares haven’t seen a lot of action during the third quarter. Overall, hedge fund sentiment was unchanged. The stock was in 39 hedge funds’ portfolios at the end of September. The level and the change in hedge fund popularity aren’t the only variables you need to analyze to decipher hedge funds’ perspectives. A stock may witness a boost in popularity but it may still be less popular than similarly priced stocks. That’s why at the end of this article we will examine companies such as Alexander & Baldwin Inc (NYSE:ALEX), Atlas Air Worldwide Holdings, Inc. (NASDAQ:AAWW), and Corcept Therapeutics Incorporated (NASDAQ:CORT) to gather more data points.

At the moment there are several formulas shareholders employ to size up stocks. A couple of the less utilized formulas are hedge fund and insider trading moves. We have shown that, historically, those who follow the top picks of the top money managers can outclass the broader indices by a superb amount (see the details here).

How have hedgies been trading Akorn, Inc. (NASDAQ:AKRX)? 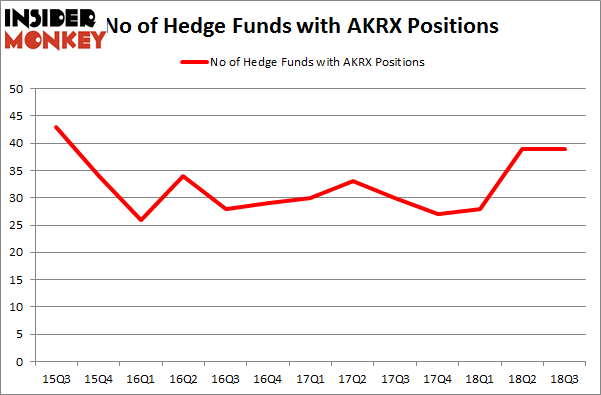 According to Insider Monkey’s hedge fund database, Solus Alternative Asset Management, managed by Christopher Pucillo, holds the largest position in Akorn, Inc. (NASDAQ:AKRX). Solus Alternative Asset Management has a $54.8 million position in the stock, comprising 10% of its 13F portfolio. The second most bullish fund manager is Marshall Wace LLP, led by Paul Marshall and Ian Wace, holding a $38.9 million position; the fund has 0.3% of its 13F portfolio invested in the stock. Some other peers that are bullish consist of Michel Massoud’s Melqart Asset Management, Andrew Feldstein and Stephen Siderow’s Blue Mountain Capital and Jim Simons’s Renaissance Technologies.

Because Akorn, Inc. (NASDAQ:AKRX) has experienced a decline in interest from hedge fund managers, we can see that there was a specific group of funds who sold off their full holdings by the end of the third quarter. At the top of the heap, Brian J. Higgins’s King Street Capital cut the biggest position of all the hedgies followed by Insider Monkey, comprising about $21.6 million in stock, and Zach Schreiber’s Point State Capital was right behind this move, as the fund dropped about $20.8 million worth. These moves are intriguing to say the least, as total hedge fund interest stayed the same (this is a bearish signal in our experience).

As you can see these stocks had an average of 9.75 hedge funds with bullish positions and the average amount invested in these stocks was $80 million. That figure was $301 million in AKRX’s case. Atlas Air Worldwide Holdings, Inc. (NASDAQ:AAWW) is the most popular stock in this table. On the other hand Gabelli Equity Trust, Inc. (The) (NYSE:GAB) is the least popular one with only 1 bullish hedge fund positions. Compared to these stocks Akorn, Inc. (NASDAQ:AKRX) is more popular among hedge funds. Considering that hedge funds are fond of this stock in relation to its market cap peers, it may be a good idea to analyze it in detail and potentially include it in your portfolio.