The latest 13F reporting period has come and gone, and Insider Monkey is again at the forefront when it comes to making use of this gold mine of data. We have processed the filings of the more than 700 world-class investment firms that we track and now have access to the collective wisdom contained in these filings, which are based on their September 30 holdings, data that is available nowhere else. Should you consider Aerojet Rocketdyne Holdings Inc (NYSE:AJRD) for your portfolio? We’ll look to this invaluable collective wisdom for the answer.

Aerojet Rocketdyne Holdings Inc (NYSE:AJRD) has experienced an increase in support from the world’s most elite money managers of late. There were 19 smart money investors long the stock at the end of the third quarter, up by 7 from the previous quarter. The number of hedge funds with AJRD holdings in the third quarter was insufficient for it to rank as one of the 30 most popular stocks among hedge funds in Q3 of 2018.

“Aerojet Rocketdyne Holdings, Inc. announced better-than-expected revenue and earnings for its second fiscal quarter as management continued to improve project execution and expand margins in its aerospace and defense businesses.” – As reported in First Eagle Fund of America’s Q3 Commentary.

In the financial world there are tons of metrics market participants have at their disposal to appraise publicly traded companies. A couple of the less known metrics are hedge fund and insider trading sentiment. Our experts have shown that, historically, those who follow the best picks of the best money managers can outpace the broader indices by a healthy margin (see the details here). 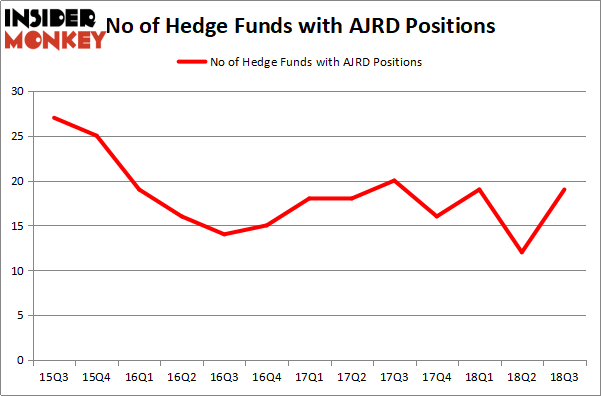 Among these funds, Steel Partners held the most valuable stake in Aerojet Rocketdyne Holdings Inc (NYSE:AJRD), which was worth $142.1 million at the end of the third quarter. On the second spot was GAMCO Investors which amassed $138.4 million worth of shares. Moreover, Royce & Associates, Millennium Management, and Renaissance Technologies were also bullish on Aerojet Rocketdyne Holdings Inc (NYSE:AJRD), allocating a large percentage of their portfolios to this stock.

As you can see these stocks had an average of 26 hedge funds with bullish positions and the average amount invested in these stocks was $404 million. That figure was $373 million in AJRD’s case. Pandora Media Inc (NYSE:P) is the most popular stock in this table. On the other hand PotlatchDeltic Corporation (NASDAQ:PCH) is the least popular one with only 16 bullish hedge fund positions. Aerojet Rocketdyne Holdings Inc (NYSE:AJRD) is not the least popular stock in this group but hedge fund interest is still below average. This is a slightly negative signal and we’d rather spend our time researching stocks that hedge funds are piling on. In this regard P might be a better candidate to consider a long position.