Is Adobe Systems Incorporated (ADBE) A Good Stock To Buy?

Investing in small cap stocks has historically been a way to outperform the market, as small cap companies typically grow faster on average than the blue chips. That outperformance comes with a price, however, as there are occasional periods of higher volatility. The time period since the end of the third quarter is one of those periods, as the Russell 2000 ETF (IWM) has underperformed the larger S&P 500 ETF (SPY) by about 4 percentage points. Given that the funds we track tend to have a disproportionate amount of their portfolios in smaller cap stocks, they have seen some volatility in their portfolios too. Actually their moves are potentially one of the factors that contributed to this volatility. In this article, we use our extensive database of hedge fund holdings to find out what the smart money thinks of Adobe Systems Incorporated (NASDAQ:ADBE).

Adobe Systems Incorporated (NASDAQ:ADBE) shares haven’t seen a lot of action during the second quarter. Overall, hedge fund sentiment was unchanged. The stock was in 67 hedge funds’ portfolios at the end of the second quarter of 2018. Aetna Inc. was also the 28th most popular stock among hedge funds at the end of the second quarter (see the list of 25 most popular stocks among hedge funds).The level and the change in hedge fund popularity aren’t the only variables you need to analyze to decipher hedge funds’ perspectives. A stock may witness a boost in popularity but it may still be less popular than similarly priced stocks. That’s why at the end of this article we will examine companies such as General Electric Company (NYSE:GE), 3M Co (NYSE:MMM), and Medtronic, Inc. (NYSE:MDT) to gather more data points.

At the beginning of this year RiverPark highlighted ADBE in its investor letter (the stock outperformed the market since then):

“Adobe shares also performed well this period as the company reported another strong quarter of better than expected results. ADBE posted 25% revenue growth with strong performance across both of its core segments: Digital Media revenue increased 29% year-over-year and Digital Marketing revenue grew a better-than-expected 18%. Expenses were well controlled, allowing operating margins to expand 350 bps to an impressive 40%, which generated EPS growth of 40% year-over-year.

We remain bullish on Adobe’s growth opportunities as the market for digital advertising solutions globally continues to expand and ADBE, through its ability to raise prices, convert existing customers to its subscription Cloud solutions, and capture new customers via innovative new product offerings, takes market share. Management recently cited the company’s total available market as being in excess of $83 billion by 2020 (a sizeable opportunity for the $7 billion in revenue Adobe) and the company’s execution and expense control remain best in class in its industry.”

We’re going to go over the key hedge fund action encompassing Adobe Systems Incorporated (NASDAQ:ADBE) before sharing what another fund manager thinks about the stock.

What does the smart money think about Adobe Systems Incorporated (NASDAQ:ADBE)? 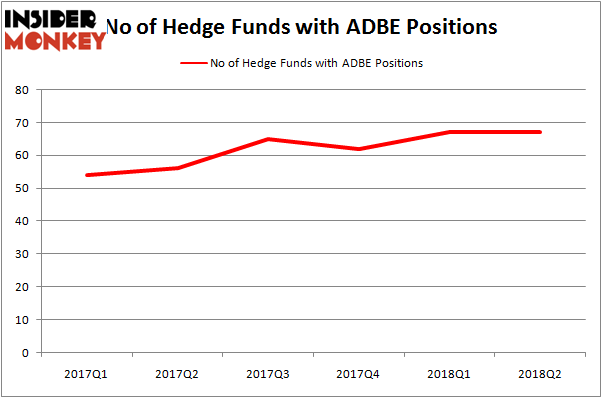 When looking at the institutional investors followed by Insider Monkey, Stephen Mandel’s Lone Pine Capital has the most valuable position in Adobe Systems Incorporated (NASDAQ:ADBE), worth close to $1.0865 billion, amounting to 5.7% of its total 13F portfolio. Sitting at the No. 2 spot is Arrowstreet Capital, managed by Peter Rathjens, Bruce Clarke and John Campbell, which holds a $1.0222 billion position; the fund has 2.5% of its 13F portfolio invested in the stock. Remaining professional money managers that hold long positions comprise Aaron Cowen’s Suvretta Capital Management, Michael R. Weisberg’s Crestwood Capital Management and Francis Cueto’s Asturias Capital.

Because Adobe Systems Incorporated (NASDAQ:ADBE) has witnessed a decline in interest from the smart money, it’s safe to say that there lies a certain “tier” of fund managers who were dropping their full holdings by the end of the second quarter. At the top of the heap, James Parsons’s Junto Capital Management cut the largest investment of all the hedgies tracked by Insider Monkey, comprising close to $30.8 million in stock. Ross Margolies’s fund, Stelliam Investment Management, also sold off its stock, about $16.4 million worth. These bearish behaviors are intriguing to say the least, as total hedge fund interest stayed the same (this is a bearish signal in our experience).

As you can see these stocks had an average of 31.25 hedge funds with bullish positions and the average amount invested in these stocks was $1577 million. That figure was $7026 million in ADBE’s case. General Electric Company (NYSE:GE) is the most popular stock in this table. On the other hand British American Tobacco PLC (ADR) (NYSEAMEX:BTI) is the least popular one with only 13 bullish hedge fund positions. Compared to these stocks Adobe Systems Incorporated (NASDAQ:ADBE) is more popular among hedge funds. Polen Capital discussed Adobe Systems in its Q2 investor letter:

Adobe continues to see prolific revenue and earnings growth from both its Digital Media and Experience Cloud offerings. The former is Adobe’s decades-old legacy business that is still growing at a blistering pace (nearly 30% recently) as it remains in a near monopoly position in the market for content creation tools. The Experience Cloud helps companies measure the effectiveness of digital content creations. It is unique to have content creation and measurement tools under one roof. Recently, Adobe also announced they will be acquiring Magento for $1.7 billion, bringing a leading e-commerce tools platform to the company. E-commerce was a missing piece that Adobe needed to help companies all the way from content creation, to measurement and commerce.

While still one of our largest holdings, we trimmed our Adobe position in the quarter from 10.0% to 8.5% purely for risk management purposes. We used the proceeds to add to our Microsoft position, bringing its weighting up to 8.5% from just under 7%.

Given that ADBE is more popular than similarly priced stocks, we believe it is still early to call the top in this stock. We believe the stock will continue to outperform the market.