Is Accenture Plc (ACN) A Good Stock To Buy?

Does Accenture Plc (NYSE:ACN) represent a good buying opportunity at the moment? Let’s briefly check the hedge fund interest towards the company. Hedge fund firms constantly search out bright intellectuals and highly-experienced employees and throw away millions of dollars on satellite photos and other research activities, so it is no wonder why they tend to generate millions in profits each year. It is also true that some hedge fund players fail inconceivably on some occasions, but net net their stock picks have been generating superior risk-adjusted returns on average over the years.

Hedge fund interest in Accenture Plc (NYSE:ACN) shares was flat at the end of last quarter. This is usually a negative indicator. At the end of this article we will also compare ACN to other stocks including HDFC Bank Limited (NYSE:HDB), Altria Group Inc (NYSE:MO), and United Technologies Corporation (NYSE:UTX) to get a better sense of its popularity.

How have hedgies been trading Accenture Plc (NYSE:ACN)?

At the end of the fourth quarter, a total of 34 of the hedge funds tracked by Insider Monkey held long positions in this stock, a change of 0% from the previous quarter. On the other hand, there were a total of 35 hedge funds with a bullish position in ACN a year ago. With the smart money’s capital changing hands, there exists an “upper tier” of noteworthy hedge fund managers who were adding to their stakes meaningfully (or already accumulated large positions). 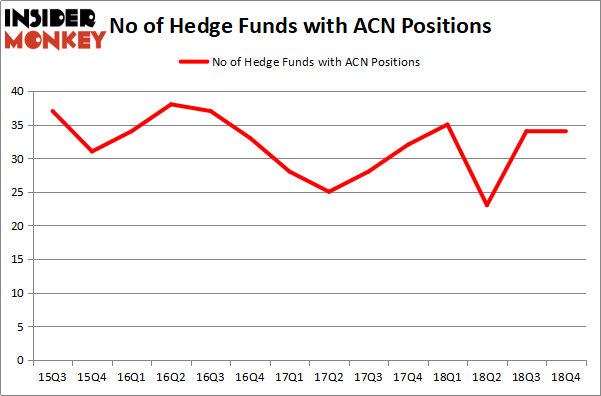 The largest stake in Accenture Plc (NYSE:ACN) was held by AQR Capital Management, which reported holding $244.7 million worth of stock at the end of September. It was followed by Praesidium Investment Management Company with a $128.7 million position. Other investors bullish on the company included Renaissance Technologies, Adage Capital Management, and Arrowstreet Capital.

Because Accenture Plc (NYSE:ACN) has experienced falling interest from the entirety of the hedge funds we track, logic holds that there lies a certain “tier” of hedge funds who were dropping their entire stakes by the end of the third quarter. Intriguingly, Andrew Feldstein and Stephen Siderow’s Blue Mountain Capital sold off the largest stake of all the hedgies tracked by Insider Monkey, worth close to $3.6 million in stock, and Michael Platt and William Reeves’s BlueCrest Capital Mgmt. was right behind this move, as the fund dropped about $3.6 million worth. These bearish behaviors are interesting, as total hedge fund interest stayed the same (this is a bearish signal in our experience).

As you can see these stocks had an average of 37.5 hedge funds with bullish positions and the average amount invested in these stocks was $1962 million. That figure was $1073 million in ACN’s case. United Technologies Corporation (NYSE:UTX) is the most popular stock in this table. On the other hand Toronto-Dominion Bank (NYSE:TD) is the least popular one with only 17 bullish hedge fund positions. Accenture Plc (NYSE:ACN) is not the least popular stock in this group but hedge fund interest is still below average. Our calculations showed that top 15 most popular stocks among hedge funds returned 19.7% through March 15th and outperformed the S&P 500 ETF (SPY) by 6.6 percentage points. Hedge funds were also right about betting on ACN, though not to the same extent, as the stock returned 18.0% and outperformed the market as well.

Were Hedge Funds Right About Buying United Technologies Corporation (UTX)?
Monthly Newsletter Strategy
Download a free copy of our newsletter and see the details inside!
Hedge Fund Resource Center
Related News
Should You Buy Accenture Plc (ACN)? Bailard’s Top Technology Stock Picks 10 Biggest Human Resources (HR) Consulting Companies In The World Top 10 Advertising Agencies in NYC 10 Companies With The Best Benefits Packages 10 Biggest Advertising Agencies In The US 5 Name Changes That Did Nothing To Help These Companies Ten of the Most Common Addictions 13 African Countries with the Largest White Population in 2018 6 Causes of Human Trafficking in Africa, India, and US
Billionaire Hedge Funds