Is 2U Inc (TWOU) A Good Stock To Buy Right Now?

We can judge whether 2U Inc (NASDAQ:TWOU) is a good investment right now by following the lead of some of the best investors in the world and piggybacking their ideas. There’s no better way to get these firms’ immense resources and analytical capabilities working for us than to follow their lead into their best ideas. While not all of these picks will be winners, our research shows that these picks historically outperformed the market when we factor in known risk factors.

Is 2U Inc (NASDAQ:TWOU) a buy right now? Prominent investors are turning less bullish. The number of long hedge fund bets were cut by 3 in recent months. Our calculations also showed that TWOU isn’t among the 30 most popular stocks among hedge funds. 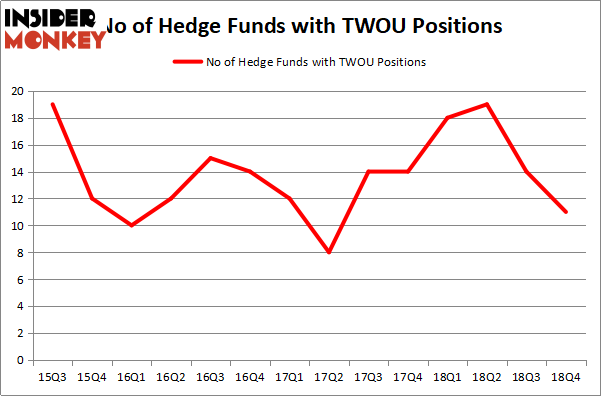 More specifically, Polar Capital was the largest shareholder of 2U Inc (NASDAQ:TWOU), with a stake worth $35.4 million reported as of the end of September. Trailing Polar Capital was Millennium Management, which amassed a stake valued at $17.5 million. Greenvale Capital, Renaissance Technologies, and Portolan Capital Management were also very fond of the stock, giving the stock large weights in their portfolios.

Because 2U Inc (NASDAQ:TWOU) has experienced declining sentiment from the smart money, it’s safe to say that there exists a select few hedgies that slashed their positions entirely in the third quarter. Intriguingly, Mark N. Diker’s Diker Management dropped the largest investment of the “upper crust” of funds tracked by Insider Monkey, valued at close to $5.7 million in stock. Brad Farber’s fund, Atika Capital, also cut its stock, about $5 million worth. These transactions are important to note, as total hedge fund interest was cut by 3 funds in the third quarter.

Let’s now take a look at hedge fund activity in other stocks similar to 2U Inc (NASDAQ:TWOU). We will take a look at RLJ Lodging Trust (NYSE:RLJ), The Timken Company (NYSE:TKR), Tetra Tech, Inc. (NASDAQ:TTEK), and Eagle Materials, Inc. (NYSE:EXP). This group of stocks’ market values are closest to TWOU’s market value.

As you can see these stocks had an average of 25 hedge funds with bullish positions and the average amount invested in these stocks was $247 million. That figure was $107 million in TWOU’s case. RLJ Lodging Trust (NYSE:RLJ) is the most popular stock in this table. On the other hand RLJ Lodging Trust (NYSE:RLJ) is the least popular one with only 25 bullish hedge fund positions. Compared to these stocks 2U Inc (NASDAQ:TWOU) is even less popular than RLJ. Our calculations showed that top 15 most popular stocks) among hedge funds returned 24.2% through April 22nd and outperformed the S&P 500 ETF (SPY) by more than 7 percentage points. A small number of hedge funds were also right about betting on TWOU, though not to the same extent, as the stock returned 24% and outperformed the market as well.

Is Mednax Inc. (MD) A Good Stock To Buy?
Monthly Newsletter Strategy
Download a free copy of our newsletter and see the details inside!
Hedge Fund Resource Center
Related News
Is 2U Inc (TWOU) A Good Stock To Buy? Is 2U Inc (TWOU) A Good Stock To Buy? Hedge Fund Managers Discuss Shorting Viasat (VSAT), 2U (TWOU), Long Positions in Microsoft (MSFT), Others Why 2U, Take-Two, Acadia, Air Lease and Acxiom Are Making Headlines Today Why Did These Stocks Move Higher On Tuesday And Should You Follow The Crowd? These Stocks Are Surging but See Which Ones Hedge Funds Think are Worth Investing In 18 Cute Tinder Bio Examples (Female) 20 Clever Bumble Bios for Guys 15 Most Physically Demanding Olympic Sports
Billionaire Hedge Funds