Intuitive Surgical, Inc. (NASDAQ:ISRG) is one of the great growth stocks of this new millenium, rising over 4,700% in the past ten years. Although its days of such monstrous returns are over, the Sunnyvale, California-based medical equipment maker is still poised for incredible growth in the next decade. In this article, let’s analyze what makes this manufacturer of futuristic surgical machinery tick.

From the Starship Enterprise’s sickbay into your doctor’s O.R….

Intuitive Surgical’s claim to fame is a single machine – the da Vinci Surgical System, a cutting edge system which translates a surgeon’s natural hand movements into micro-movements of tiny instruments planted inside the patient through small incisions. The system’s technology can even offer 3D and HD microscopic views of the patient, allowing MIS (minimally invasive surgery) to be performed on a smaller scale than ever before. Sales of the da Vinci Surgical System and its accessories comprised approximately 84% of the company’s 2012 revenue, with the remainder generated by service fees.

The growth of the da Vinci Surgical System is expected to snowball as hospitals upgrade their outdated systems. With no real competitors to speak of, the company’s niche market is set to transform into a mainstream one.

For its fourth quarter, Intuitive Surgical posted earnings of $4.25 per share, easily topping analyst estimates by 21 cents. Its revenue of $609.3 million also topped estimates of $584.4 million. The company has a solid history of beating forecasts by a wide margin. 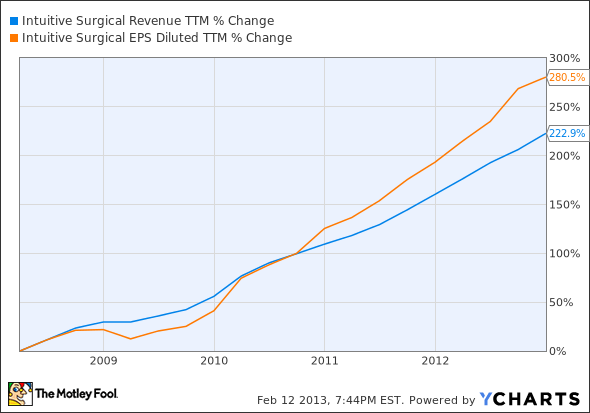 Over the past five years, Intuitive Surgical has grown revenue 222.9% and diluted earnings 280.5%. The company has kept its top and bottom line growth in sync, a difficult task for many high growth companies. For fiscal 2012, Intuitive Surgical grew its revenue 24% – a double-digit standard that analysts expect to continue into the next two years.

To put Intuitive Surgical’s rapid growth into perspective, the company generated $373 million in 2006. In 2014, it is expected to generate approximately $2.95 billion. Meanwhile, GAAP-adjusted earnings have increased nearly eight-fold from less than $2 per share to nearly $15.04 last year.

Those GAAP-adjusted earnings exclude a tax benefit during the year, which added 94 cents per share. The company is expected to earn $17.65 per share this year, and $20.59 in 2014.

Intuitive Surgical has also kept growing its cash reserves and margins, and has a pristine balance sheet with no debt. In the fourth quarter, the company grew its cash and investments by $200 million to finish the year with a $750 million gain. That gives the company a total cash pile of $1.32 billion, which could be allocated to future R&D investments, stock buyback plans or dividends. Intuitive Surgical already has an active stock buyback plan, where the company repurchased $53 million in shares during the fourth quarter.