Is Intrepid Potash, Inc. (NYSE:IPI) a buy here? Hedge funds are taking an optimistic view. The number of long hedge fund bets increased by 2 lately. Our calculations also showed that IPI isn’t among the 30 most popular stocks among hedge funds (see the video below). IPI was in 16 hedge funds’ portfolios at the end of June. There were 14 hedge funds in our database with IPI positions at the end of the previous quarter. 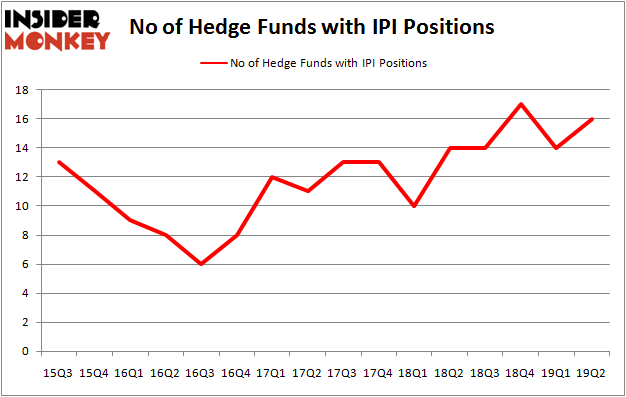 Unlike other investors who track every movement of the 25 largest hedge funds, our long-short investment strategy relies on hedge fund buy/sell signals given by the 100 best performing hedge funds. Let’s take a glance at the recent hedge fund action regarding Intrepid Potash, Inc. (NYSE:IPI).

What does smart money think about Intrepid Potash, Inc. (NYSE:IPI)?

Heading into the third quarter of 2019, a total of 16 of the hedge funds tracked by Insider Monkey were bullish on this stock, a change of 14% from the first quarter of 2019. The graph below displays the number of hedge funds with bullish position in IPI over the last 16 quarters. With the smart money’s positions undergoing their usual ebb and flow, there exists a select group of noteworthy hedge fund managers who were increasing their stakes substantially (or already accumulated large positions).

The largest stake in Intrepid Potash, Inc. (NYSE:IPI) was held by Royce & Associates, which reported holding $8 million worth of stock at the end of March. It was followed by Prescott Group Capital Management with a $5.3 million position. Other investors bullish on the company included Perella Weinberg Partners, Marshall Wace LLP, and Wallace Capital Management.

Consequently, key money managers have jumped into Intrepid Potash, Inc. (NYSE:IPI) headfirst. Perella Weinberg Partners, initiated the most outsized position in Intrepid Potash, Inc. (NYSE:IPI). Perella Weinberg Partners had $4.1 million invested in the company at the end of the quarter. Renaissance Technologies also initiated a $0.3 million position during the quarter. The only other fund with a new position in the stock is Bruce Kovner’s Caxton Associates LP.

As you can see these stocks had an average of 8.25 hedge funds with bullish positions and the average amount invested in these stocks was $99 million. That figure was $30 million in IPI’s case. Sierra Wireless, Inc. (NASDAQ:SWIR) is the most popular stock in this table. On the other hand Synthorx, Inc. (NASDAQ:THOR) is the least popular one with only 7 bullish hedge fund positions. Compared to these stocks Intrepid Potash, Inc. (NYSE:IPI) is more popular among hedge funds. Our calculations showed that top 20 most popular stocks among hedge funds returned 24.4% in 2019 through September 30th and outperformed the S&P 500 ETF (SPY) by 4 percentage points. Unfortunately IPI wasn’t nearly as popular as these 20 stocks and hedge funds that were betting on IPI were disappointed as the stock returned -2.7% during the third quarter and underperformed the market. If you are interested in investing in large cap stocks with huge upside potential, you should check out the top 20 most popular stocks among hedge funds as many of these stocks already outperformed the market in Q3.