Russell 2000 ETF (IWM) lagged the larger S&P 500 ETF (SPY) by more than 10 percentage points since the end of the third quarter of 2018 as investors first worried over the possible ramifications of rising interest rates and the escalation of the trade war with China. The hedge funds and institutional investors we track typically invest more in smaller-cap stocks than an average investor (i.e. only about 60% S&P 500 constituents were among the 500 most popular stocks among hedge funds), and we have seen data that shows those funds paring back their overall exposure. Those funds cutting positions in small-caps is one reason why volatility has increased. In the following paragraphs, we take a closer look at what hedge funds and prominent investors think of Interpublic Group of Companies Inc (NYSE:IPG) and see how the stock is affected by the recent hedge fund activity.

Is Interpublic Group of Companies Inc (NYSE:IPG) a buy here? Prominent investors are getting more bullish. The number of bullish hedge fund positions rose by 6 in recent months. Our calculations also showed that IPG isn’t among the 30 most popular stocks among hedge funds (see the video below). IPG was in 32 hedge funds’ portfolios at the end of the second quarter of 2019. There were 26 hedge funds in our database with IPG positions at the end of the previous quarter.

To most stock holders, hedge funds are viewed as underperforming, outdated investment tools of yesteryear. While there are greater than 8000 funds with their doors open today, Our researchers choose to focus on the bigwigs of this club, about 750 funds. These money managers watch over the majority of the smart money’s total asset base, and by tracking their best investments, Insider Monkey has figured out various investment strategies that have historically exceeded the broader indices. Insider Monkey’s flagship hedge fund strategy surpassed the S&P 500 index by around 5 percentage points per annum since its inception in May 2014. We were able to generate large returns even by identifying short candidates. Our portfolio of short stocks lost 25.7% since February 2017 (through September 30th) even though the market was up more than 33% during the same period. We just shared a list of 10 short targets in our latest quarterly update .

At Q2’s end, a total of 32 of the hedge funds tracked by Insider Monkey held long positions in this stock, a change of 23% from the previous quarter. By comparison, 16 hedge funds held shares or bullish call options in IPG a year ago. With hedge funds’ positions undergoing their usual ebb and flow, there exists an “upper tier” of key hedge fund managers who were upping their stakes significantly (or already accumulated large positions). 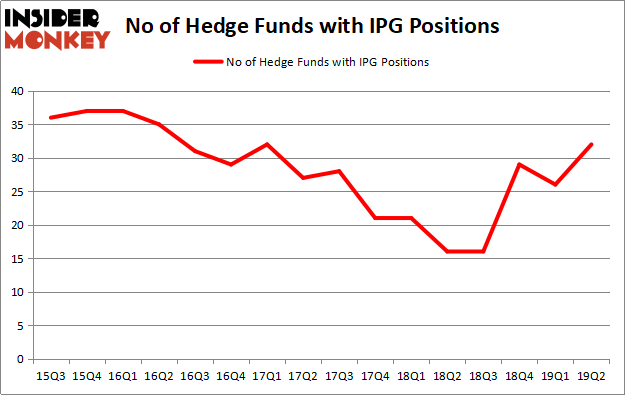 According to Insider Monkey’s hedge fund database, Richard S. Pzena’s Pzena Investment Management has the most valuable position in Interpublic Group of Companies Inc (NYSE:IPG), worth close to $373 million, amounting to 2% of its total 13F portfolio. The second most bullish fund manager is John W. Rogers of Ariel Investments, with a $163.9 million position; 2.1% of its 13F portfolio is allocated to the company. Some other professional money managers with similar optimism contain Renaissance Technologies, Ken Griffin’s Citadel Investment Group and Mario Gabelli’s GAMCO Investors.

Let’s now take a look at hedge fund activity in other stocks – not necessarily in the same industry as Interpublic Group of Companies Inc (NYSE:IPG) but similarly valued. These stocks are Universal Display Corporation (NASDAQ:OLED), Vail Resorts, Inc. (NYSE:MTN), EQT Midstream Partners LP (NYSE:EQM), and DocuSign, Inc. (NASDAQ:DOCU). All of these stocks’ market caps are closest to IPG’s market cap.

As you can see these stocks had an average of 21 hedge funds with bullish positions and the average amount invested in these stocks was $241 million. That figure was $882 million in IPG’s case. Vail Resorts, Inc. (NYSE:MTN) is the most popular stock in this table. On the other hand EQT Midstream Partners LP (NYSE:EQM) is the least popular one with only 8 bullish hedge fund positions. Interpublic Group of Companies Inc (NYSE:IPG) is not the most popular stock in this group but hedge fund interest is still above average. This is a slightly positive signal but we’d rather spend our time researching stocks that hedge funds are piling on. Our calculations showed that top 20 most popular stocks among hedge funds returned 24.4% in 2019 through September 30th and outperformed the S&P 500 ETF (SPY) by 4 percentage points. Unfortunately IPG wasn’t nearly as popular as these 20 stocks and hedge funds that were betting on IPG were disappointed as the stock returned -3.4% during the third quarter and underperformed the market. If you are interested in investing in large cap stocks with huge upside potential, you should check out the top 20 most popular stocks among hedge funds as many of these stocks already outperformed the market so far this year.