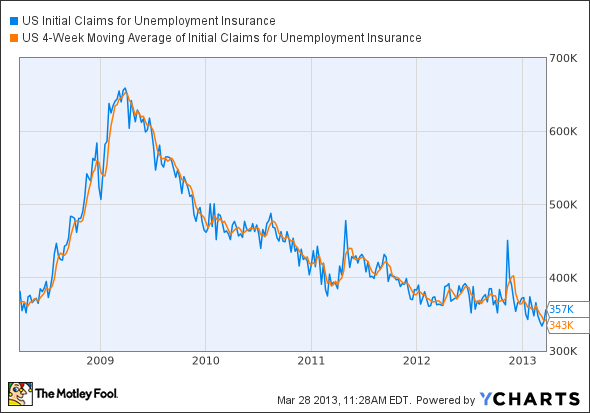 The more interesting number today was the government’s final revision of Q4 2012 real GDP to 0.4% growth. GDP was initially reported to be down 0.1% in Q4. That number was then revised to 0.1% growth in Q4, and it now has been updated to 0.4% growth. The increase was led by a 13.2% increase in business investment, particularly in nonresidential structures, equipment, and software. This is good news, as it shows the economy was stronger than previously thought going into 2013, when growth would be dampened by new taxes and the sequester.

Second for the Dow today is International Business Machines Corp. (NYSE:IBM), up 0.7%. This morning IBM’s chief consulting competitor, Accenture Plc (NYSE:ACN), reported better-than-expected earnings for the most recent quarter. Also pushing up International Business Machines Corp. (NYSE:IBM) was news that the government had signed into law a new cyber-espionage review process for U.S. government technology purchases. This is good news for U.S. tech companies and consultants that work with the government.

Third for the Dow today is Hewlett-Packard Company (NYSE:HPQ), up 0.4% on no real news. 2012 was a rough year for HP, with the stock down 47%. The stock fell so far that it made the 2013 Dogs of the Dow with its then-dividend yield of 3.72%. This year the stock has made a comeback, up 66% as investors realize the drop was overdone and the company continued executing on its turnaround plans. Last week the company also announced a 10% boost to the dividend, giving the stock a forward yield of 2.45%.

The article These 3 Dow Stocks Are Winning Today originally appeared on Fool.com and is written by Dan Dzombak.

Dan Dzombak can be found on Twitter @DanDzombak or on his Facebook page, DanDzombak. He has no position in any stocks mentioned. The Motley Fool recommends Accenture. The Motley Fool owns shares of International Business Machines (NYSE:IBM).