Although the masses and most of the financial media blame hedge funds for their exorbitant fee structure and disappointing performance, these investors have proved to have great stock picking abilities over the years (that’s why their assets under management continue to swell). We believe hedge fund sentiment should serve as a crucial tool of an individual investor’s stock selection process, as it may offer great insights of how the brightest minds of the finance industry feel about specific stocks. After all, these people have access to smartest analysts and expensive data/information sources that individual investors can’t match. So should one consider investing in International Business Machines Corp. (NYSE:IBM)? The smart money sentiment can provide an answer to this question.

Is International Business Machines Corp. (NYSE:IBM) a safe investment right now? Money managers are getting less bullish. The number of long hedge fund bets decreased by 1 recently. Our calculations also showed that IBM isn’t among the 30 most popular stocks among hedge funds (see the video below). IBM was in 45 hedge funds’ portfolios at the end of the second quarter of 2019. There were 46 hedge funds in our database with IBM holdings at the end of the previous quarter.

In the eyes of most traders, hedge funds are viewed as slow, old financial vehicles of years past. While there are over 8000 funds with their doors open at present, Our researchers choose to focus on the upper echelon of this group, approximately 750 funds. These money managers handle the lion’s share of all hedge funds’ total asset base, and by observing their unrivaled picks, Insider Monkey has unearthed numerous investment strategies that have historically defeated the broader indices. Insider Monkey’s flagship hedge fund strategy outperformed the S&P 500 index by around 5 percentage points annually since its inception in May 2014. We were able to generate large returns even by identifying short candidates. Our portfolio of short stocks lost 25.7% since February 2017 (through September 30th) even though the market was up more than 33% during the same period. We just shared a list of 10 short targets in our latest quarterly update .

Unlike some fund managers who are betting on Dow reaching 40000 in a year, our long-short investment strategy doesn’t rely on bull markets to deliver double digit returns. We only rely on hedge fund buy/sell signals. We’re going to take a peek at the recent hedge fund action regarding International Business Machines Corp. (NYSE:IBM).

What have hedge funds been doing with International Business Machines Corp. (NYSE:IBM)? 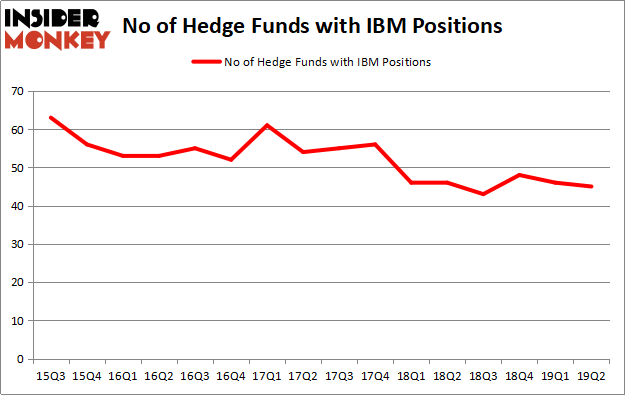 More specifically, Arrowstreet Capital was the largest shareholder of International Business Machines Corp. (NYSE:IBM), with a stake worth $734.3 million reported as of the end of March. Trailing Arrowstreet Capital was AQR Capital Management, which amassed a stake valued at $466.6 million. Citadel Investment Group, D E Shaw, and Renaissance Technologies were also very fond of the stock, giving the stock large weights in their portfolios.

Seeing as International Business Machines Corp. (NYSE:IBM) has experienced falling interest from the entirety of the hedge funds we track, logic holds that there is a sect of funds that decided to sell off their full holdings in the second quarter. At the top of the heap, Mike Masters’s Masters Capital Management dropped the biggest investment of the 750 funds tracked by Insider Monkey, totaling an estimated $42.3 million in stock, and Paul Marshall and Ian Wace’s Marshall Wace LLP was right behind this move, as the fund said goodbye to about $6.9 million worth. These bearish behaviors are important to note, as aggregate hedge fund interest was cut by 1 funds in the second quarter.

As you can see these stocks had an average of 48 hedge funds with bullish positions and the average amount invested in these stocks was $3984 million. That figure was $2041 million in IBM’s case. Thermo Fisher Scientific Inc. (NYSE:TMO) is the most popular stock in this table. On the other hand Novo Nordisk A/S (NYSE:NVO) is the least popular one with only 17 bullish hedge fund positions. International Business Machines Corp. (NYSE:IBM) is not the least popular stock in this group but hedge fund interest is still below average. Our calculations showed that top 20 most popular stocks among hedge funds returned 24.4% in 2019 through September 30th and outperformed the S&P 500 ETF (SPY) by 4 percentage points. A small number of hedge funds were also right about betting on IBM as the stock returned 6.7% during the same time frame and outperformed the market by an even larger margin.