Is Intercept Pharmaceuticals Inc (NASDAQ:ICPT) a superb investment today? Hedge funds are becoming less confident. The number of long hedge fund bets experienced a decline of 2 lately. ICPT was in 15 hedge funds’ portfolios at the end of September. There were 17 hedge funds in our database with ICPT positions at the end of the previous quarter. At the end of this article we will also compare ICPT to other stocks including Morningstar, Inc. (NASDAQ:MORN), Oshkosh Corporation (NYSE:OSK), and Lancaster Colony Corp. (NASDAQ:LANC) to get a better sense of its popularity.

Heading into the fourth quarter of 2016, a total of 15 of the hedge funds tracked by Insider Monkey were long this stock, a 12% fall from the previous quarter. Below, you can check out the change in hedge fund sentiment towards ICPT over the last 5 quarters. With hedge funds’ sentiment swirling, there exists an “upper tier” of noteworthy hedge fund managers who were boosting their stakes substantially (or already accumulated large positions). 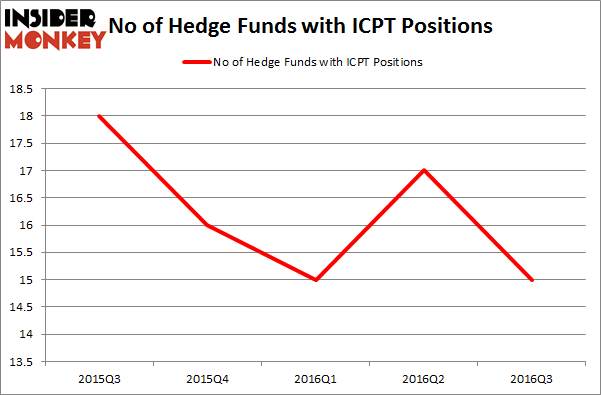 Of the funds tracked by Insider Monkey, OrbiMed Advisors, led by Samuel Isaly, holds the largest position in Intercept Pharmaceuticals Inc (NASDAQ:ICPT). OrbiMed Advisors has a $184.3 million position in the stock, comprising 2.1% of its 13F portfolio. The second most bullish fund manager is Citadel Investment Group, led by Ken Griffin, which holds a $70.2 million position. Some other peers that hold long positions comprise Jonathon Jacobson’s Highfields Capital Management, Daniel Gold’s QVT Financial and Principal Global Investors’ Columbus Circle Investors. We should note that none of these hedge funds are among our list of the 100 best performing hedge funds which is based on the performance of their 13F long positions in non-microcap stocks.

Now that we’ve mentioned the most bullish investors, let’s also take a look at some funds that cut their entire stakes in the stock during the third quarter. It’s worth mentioning that Ken Griffin’s Citadel Investment Group cut the largest stake of all the hedgies followed by Insider Monkey, comprising an estimated $8.6 million in call options. Ken Greenberg and David Kim’s fund, Ghost Tree Capital, also dropped its call options, about $5 million worth.

As you can see these stocks had an average of 20 hedge funds with bullish positions and the average amount invested in these stocks was $269 million. That figure was $392 million in ICPT’s case. Oshkosh Corporation (NYSE:OSK) is the most popular stock in this table. On the other hand Lancaster Colony Corp. (NASDAQ:LANC) is the least popular one with only 14 bullish hedge fund positions. Intercept Pharmaceuticals Inc (NASDAQ:ICPT) is not the least popular stock in this group but hedge fund interest is still below average. This is a slightly negative signal and we’d rather spend our time researching stocks that hedge funds are piling on. In this regard OSK might be a better candidate to consider taking a long position in.