“Since 2006, value stocks (IVE vs IVW) have underperformed 11 of the 13 calendar years and when they beat growth, it wasn’t by much. Cumulatively, through this week, it has been a 122% differential (up 52% for value vs up 174% for growth). This appears to be the longest and most severe drought for value investors since data collection began. It will go our way eventually as there are too many people paying far too much for today’s darlings, both public and private. Further, the ten-year yield of 2.5% (pre-tax) isn’t attractive nor is real estate. We believe the value part of the global equity market is the only place to earn solid risk adjusted returns and we believe those returns will be higher than normal,” said Vilas Fund in its Q1 investor letter. We aren’t sure whether value stocks outperform growth, but we follow hedge fund investor letters to understand where the markets and stocks might be going. This article will lay out and discuss the hedge fund and institutional investor sentiment towards Insperity Inc (NYSE:NSP).

Hedge fund interest in Insperity Inc (NYSE:NSP) shares was flat at the end of last quarter. This is usually a negative indicator. The level and the change in hedge fund popularity aren’t the only variables you need to analyze to decipher hedge funds’ perspectives. A stock may witness a boost in popularity but it may still be less popular than similarly priced stocks. That’s why at the end of this article we will examine companies such as National Fuel Gas Company (NYSE:NFG), Healthequity Inc (NASDAQ:HQY), and Carter’s, Inc. (NYSE:CRI) to gather more data points. Our calculations also showed that NSP isn’t among the 30 most popular stocks among hedge funds (click for Q3 rankings and see the video below for Q2 rankings).

In the eyes of most investors, hedge funds are assumed to be slow, old investment tools of the past. While there are more than 8000 funds trading at present, Our researchers choose to focus on the upper echelon of this club, approximately 750 funds. Most estimates calculate that this group of people orchestrate most of the smart money’s total capital, and by keeping track of their first-class picks, Insider Monkey has come up with a number of investment strategies that have historically surpassed the S&P 500 index. Insider Monkey’s flagship short hedge fund strategy exceeded the S&P 500 short ETFs by around 20 percentage points annually since its inception in May 2014. Our portfolio of short stocks lost 27.8% since February 2017 (through November 21st) even though the market was up more than 39% during the same period. We just shared a list of 7 short targets in our latest quarterly update .

Unlike the largest US hedge funds that are convinced Dow will soar past 40,000 or the world’s most bearish hedge fund that’s more convinced than ever that a crash is coming, our long-short investment strategy doesn’t rely on bull or bear markets to deliver double digit returns. We only rely on the best performing hedge funds‘ buy/sell signals. Let’s view the key hedge fund action surrounding Insperity Inc (NYSE:NSP). 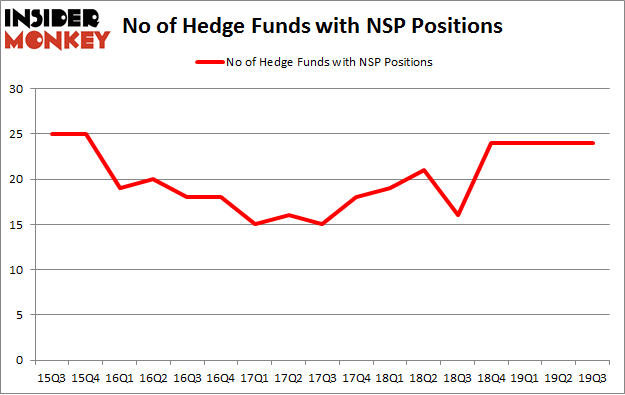 More specifically, Marshall Wace was the largest shareholder of Insperity Inc (NYSE:NSP), with a stake worth $99.1 million reported as of the end of September. Trailing Marshall Wace was AQR Capital Management, which amassed a stake valued at $59.9 million. GLG Partners, North Peak Capital, and D E Shaw were also very fond of the stock, becoming one of the largest hedge fund holders of the company. In terms of the portfolio weights assigned to each position North Peak Capital allocated the biggest weight to Insperity Inc (NYSE:NSP), around 13.53% of its portfolio. SG Capital Management is also relatively very bullish on the stock, setting aside 3.02 percent of its 13F equity portfolio to NSP.

Due to the fact that Insperity Inc (NYSE:NSP) has experienced declining sentiment from the entirety of the hedge funds we track, we can see that there is a sect of funds that elected to cut their positions entirely heading into Q4. Interestingly, David Harding’s Winton Capital Management cut the biggest position of the 750 funds followed by Insider Monkey, worth about $11.1 million in stock, and Peter Rathjens, Bruce Clarke and John Campbell’s Arrowstreet Capital was right behind this move, as the fund sold off about $7.3 million worth. These transactions are interesting, as aggregate hedge fund interest stayed the same (this is a bearish signal in our experience).

As you can see these stocks had an average of 20.5 hedge funds with bullish positions and the average amount invested in these stocks was $179 million. That figure was $343 million in NSP’s case. Carter’s, Inc. (NYSE:CRI) is the most popular stock in this table. On the other hand Healthequity Inc (NASDAQ:HQY) is the least popular one with only 19 bullish hedge fund positions. Compared to these stocks Insperity Inc (NYSE:NSP) is more popular among hedge funds. Our calculations showed that top 20 most popular stocks among hedge funds returned 37.4% in 2019 through the end of November and outperformed the S&P 500 ETF (SPY) by 9.9 percentage points. Unfortunately NSP wasn’t nearly as popular as these 20 stocks and hedge funds that were betting on NSP were disappointed as the stock returned -21.1% during the first two months of the fourth quarter and underperformed the market. If you are interested in investing in large cap stocks with huge upside potential, you should check out the top 20 most popular stocks among hedge funds as 70 percent of these stocks already outperformed the market in Q4.