Hedge funds and other investment firms that we track manage billions of dollars of their wealthy clients’ money, and needless to say, they are painstakingly thorough when analyzing where to invest this money, as their own wealth also depends on it. Regardless of the various methods used by elite investors like David Tepper and David Abrams, the resources they expend are second-to-none. This is especially valuable when it comes to small-cap stocks, which is where they generate their strongest outperformance, as their resources give them a huge edge when it comes to studying these stocks compared to the average investor, which is why we intently follow their activity in the small-cap space. Nevertheless, it is also possible to identify cheap large cap stocks by following the footsteps of best performing hedge funds. What do these smart investors think about Inphi Corporation (NYSE:IPHI)?

Is Inphi Corporation (NYSE:IPHI) a healthy stock for your portfolio? Prominent investors are becoming more confident. The number of long hedge fund bets improved by 4 lately. Our calculations also showed that IPHI isn’t among the 30 most popular stocks among hedge funds (click for Q3 rankings and see the video at the end of this article for Q2 rankings). IPHI was in 30 hedge funds’ portfolios at the end of September. There were 26 hedge funds in our database with IPHI holdings at the end of the previous quarter.

We leave no stone unturned when looking for the next great investment idea. For example Discover is offering this insane cashback card, so we look into shorting the stock. One of the most bullish analysts in America just put his money where his mouth is. He says, “I’m investing more today than I did back in early 2009.” So we check out his pitch. We read hedge fund investor letters and listen to stock pitches at hedge fund conferences. We even check out this option genius’ weekly trade ideas. This December, we recommended Adams Energy as a one-way bet based on an under-the-radar fund manager’s investor letter and the stock already gained 20 percent. Keeping this in mind we’re going to take a peek at the recent hedge fund action surrounding Inphi Corporation (NYSE:IPHI).

At the end of the third quarter, a total of 30 of the hedge funds tracked by Insider Monkey were bullish on this stock, a change of 15% from the second quarter of 2019. Below, you can check out the change in hedge fund sentiment towards IPHI over the last 17 quarters. With hedge funds’ sentiment swirling, there exists a few noteworthy hedge fund managers who were boosting their stakes substantially (or already accumulated large positions). 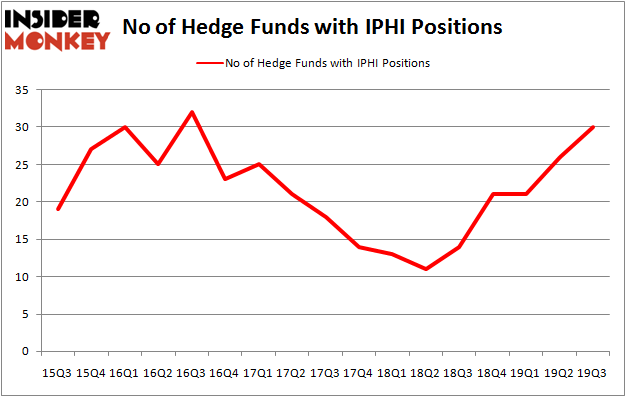 Of the funds tracked by Insider Monkey, Citadel Investment Group, managed by Ken Griffin, holds the number one position in Inphi Corporation (NYSE:IPHI). Citadel Investment Group has a $68.2 million position in the stock, comprising less than 0.1%% of its 13F portfolio. On Citadel Investment Group’s heels is Renaissance Technologies, which holds a $47.2 million position; less than 0.1%% of its 13F portfolio is allocated to the company. Other hedge funds and institutional investors that hold long positions encompass John Overdeck and David Siegel’s Two Sigma Advisors, David E. Shaw’s D E Shaw and Richard Driehaus’s Driehaus Capital. In terms of the portfolio weights assigned to each position Cavalry Asset Management allocated the biggest weight to Inphi Corporation (NYSE:IPHI), around 5.27% of its 13F portfolio. Boardman Bay Capital Management is also relatively very bullish on the stock, setting aside 1.54 percent of its 13F equity portfolio to IPHI.

As one would reasonably expect, specific money managers were leading the bulls’ herd. Maverick Capital, managed by Lee Ainslie, created the largest position in Inphi Corporation (NYSE:IPHI). Maverick Capital had $27.9 million invested in the company at the end of the quarter. Peter Rathjens, Bruce Clarke and John Campbell’s Arrowstreet Capital also made a $20.8 million investment in the stock during the quarter. The other funds with new positions in the stock are Principal Global Investors’s Columbus Circle Investors, Charles Davidson and Joseph Jacobs’s Wexford Capital, and John Osterweis’s Osterweis Capital Management.

As you can see these stocks had an average of 20.5 hedge funds with bullish positions and the average amount invested in these stocks was $314 million. That figure was $388 million in IPHI’s case. Extended Stay America Inc (NYSE:STAY) is the most popular stock in this table. On the other hand Chesapeake Energy Corporation (NYSE:CHK) is the least popular one with only 17 bullish hedge fund positions. Compared to these stocks Inphi Corporation (NYSE:IPHI) is more popular among hedge funds. Our calculations showed that top 20 most popular stocks among hedge funds returned 41.1% in 2019 through December 23rd and outperformed the S&P 500 ETF (SPY) by 10.1 percentage points. Hedge funds were also right about betting on IPHI as the stock returned 132.4% so far in 2019 (through 12/23) and outperformed the market by an even larger margin. Hedge funds were clearly right about piling into this stock relative to other stocks with similar market capitalizations.